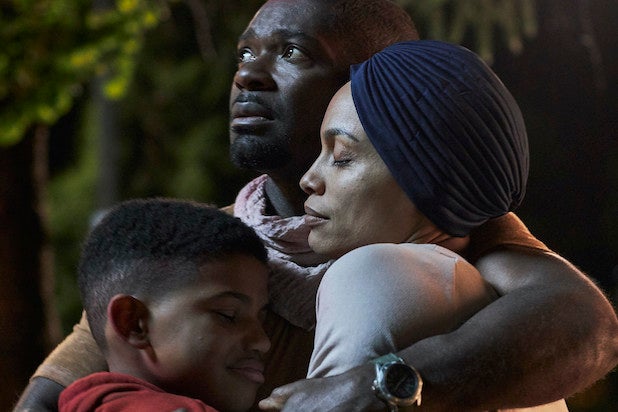 It’s a tricky balancing act to take an audience from a terminally-ill mom to an avalanche of insects, but director David Oyelowo (working from Emma Needell’s Black List screenplay) gets all the tones just right in “The Water Man,” a kid adventure that recalls the sort of ripping juvenile yarns that Disney, and later Amblin, used to crank out on a regular basis.

Amid the excitement — those bugs, a pack of wild horses, a looming forest fire — the film finds room to explore bigger issues, like living life to the fullest even when death is inevitable, and the fact that the toughest-acting kids are often the most vulnerable.

As a Navy kid whose father Amos (Oyelowo) was often stationed overseas, young Gunner (Lonnie Chavis, “This Is Us”) is a sensitive boy who’s very close to his mom Mary (Rosario Dawson). Now that Amos is back home, father and son find it difficult to find common ground, and when Gunner realizes Mary has leukemia, he begins devouring medical textbooks. Before the movie can slide into “The Book of Henry” territory, thankfully, Gunner changes tactics, seeking instead to find the “Water Man” of local legend, who has managed to cheat death and achieve immortality.

Watch Video: David Oyelowo Chose 'The Water Man' as His Directorial Debut Because of His Love for 'The Goonies'

Armed with a map and some intel from mortician Jim (Alfred Molina, having a very good time here), Gunner hires Jo (Amiah Miller, “War for the Planet of the Apes”) to be his guide into the woods. Jo claims that she has encountered the Water Man and charges the local kids to hear her story. Although the quiet, bookish Gunner initially has nothing in common with this tough-talking, blue-haired runaway, they soon form a friendship while navigating the delights and the terrors of the deep woods.

Despite a few moments in which cell phones play into the plot, there’s a timelessness to the story here. (Assuming you don’t count Gunner’s “E.T.” lunchbox.) It’s a tale of two outsiders forming a bond and learning life lessons under extreme circumstances. Oyelowo and Needell subtly but skillfully keep everything analog, from Gunner’s friendship with the local bookstore owner to the pen-and-ink he uses to create the graphic novel he’s been working on.

Chavis and Miller are seasoned enough young actors that they don’t come off as first-timers, but then they also don’t have that hardened kid-star patter, either. As a character who is herself throwing up walls and performing a more worldly version of herself, Miller takes us through Jo’s various layers of protection, while Chavis cuts to the heart of Gunner’s heartbreak over his mother and how it drives him to go on this treacherous trek.

Among the adults, Dawson is all warmth as the dying mom, and Oyelowo finds the sensitivity lurking within his gung-ho Naval officer. (His American accent feels a little less focused than his skillful summoning of Martin Luther King Jr.’s distinctive voice in “Selma.”

Director of photography Matthew J. Lloyd (“Spider-Man: Far From Home”) captures the many facets of this tale, from the coziness of a small-town to sun-dappled sylvan beauty to more haunting images, particularly one in which Gunner ventures into the dark of the forest late at night, lit only by the lantern strapped to his forehead, with his breath in the cold air shrouding his head in fog.

“The Water Man” affirms the strength of families, be they biological or chosen, and it’s a grand outdoor adventure aimed at kids who are probably spending too much time staring at a small screen in the palms of their hands. It also affirms Oyelowo as a filmmaker who understands the various pieces that go into the craft — it’s a well-acted, great-looking movie, paced well by editor Blu Murray (“Glass”). Both Oyelowo and Regina King, another actor premiering her directorial debut at the 2020 fall festivals, make us eager to see what they do next.