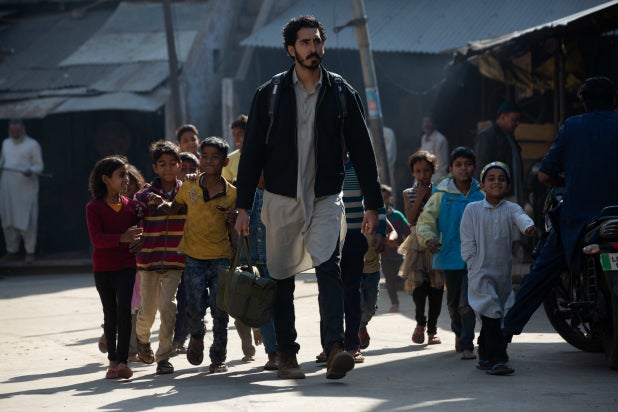 A thriller without thrills is merely a drama, and “The Wedding Guest” is a dull drama at that. The story of a kidnapping gone slightly wrong, Michael Winterbottom’s latest film is a low, slow boil with no real surprises and an ending that will elicit a “That’s it?”

Dev Patel stars as Jay (the name is never used, but that’s what the credits list), the kidnapper in question. He’s a hired hand and not, in fact, the guest at a wedding. We meet him as he’s packing; along with the standard clothes and shoes, he puts in his suitcase a slew of passports. Jay looks stricken as he moves through airport security and onto a plane. He’s traveling from Britain to Pakistan, where he’ll rent two cars and buy two guns.

After a minimum of surveillance of a guarded home, Jay strikes in the middle of the night, abducting a woman named Samira (Radhika Apte, Netflix’s “Ghoul”). He puts duct tape over her mouth and a hood over her head, and when they get to one of his cars, he tosses her in the trunk. It would have gone smoothly if only the pesky guard hadn’t gotten in the way; when he lifts up his gun to take a shot at Jay, Jay shoots him first and then again, killing him. This will prove a complication that sets what little plot there is in motion.

Samira knows who sent Jay. She was arranged to get married but is in love with another man: Deepesh (Jim Sarbh), the man who hired Jay. Despite his awaiting payday, Jay gives Samira a choice: He can take her to Deepesh as planned, and they can “always be on the run.” Or she can go back and get married. She doesn’t want to be married, so the plan progresses.

Except that Deepesh no longer wants her. When he and Jay meet in India, Deepesh tells him that there’s too much heat surrounding Samira now that Jay killed the guard and that he should take her back to Pakistan. Jay agrees — for more money.

Winterbottom’s script is sleepy to the point of laziness. The first third of the film is nearly dialogue-free, and there’s just not enough here to enrapture you. The director (whose previous films include “The Trip” and “A Mighty Heart”) doesn’t give Jay and Samira any personality or defining characteristics beyond “kidnapper” and “damsel in distress,” though Samira quickly stops being distressed and develops Stockholm syndrome. When she kisses Jay, it’s so predictable you’ll laugh. (Whoops: spoiler alert.) For a second, you’ll wonder whether the smooch is for real or if she’s just playing Jay; you won’t be kept in suspense for long.

Patel and Apte give decent enough performances with what little they’re given to work. But the film’s strongest suit is its sense of place. Winterbottom moves the plot from Delhi to Jaipur to Goa, with all locations teeming with life, color, and palpable heat as first Jay and then the pair travel through back alleys and open-air markets. But ultimately, life in the streets can’t make up for the torpor of the story, and “The Wedding Guest” overstays its welcome.