[Spoilers ahead for “Captain Marvel.”]

So you’ve seen “Captain Marvel” and now you have a bunch of questions about Brie Larson’s Carol Danvers, her history — and wait who was Marvel… or was it Mar-Vell? And what about Monica Rambeau.

Like every other film in the Marvel Cinematic Universe, “Captain Marvel” only loosely adapts from the comic books, streamlining a hell of a lot. It does a fine job of bringing together characters who are only loosely-connected in the comics, and it boasts a strong, diverse cast to boot. But what is the actual history of Captain Marvel?

That’s a huge question. The answer involves not only characters like Mar-Vell and Carol Danvers, but a cosmic badass partly inspired by actress Pam Grier, some extremely convoluted alien relations, and the first Muslim character to headline a Marvel comic book. Strap in because it’s complicated, weird as hell (this is a good thing), and occasionally ahead of its time.

To start, in the comics Carol Danvers isn’t the first Captain Marvel, or even the second — she’s the seventh. The first is Mar-Vell.

In the film, Mar-Vell is the Kree scientist, played by Annette Bening, who rebels against her people’s imperialistic wars of conquest and comes to earth disguised as a human named Wendy Lawson. Mar-Vell’s comics counterpart is male, but just like in the film, he’s a mentor to Carol Danvers and partly responsible for how she got her powers. (More on that later.)

Created in 1967 by Stan Lee and Gene Colan, Mar-Vell was a Kree warrior sent to earth on an observation mission with the ultimate goal of destroying the planet. Because of course.

Also Read: Let's Talk About Why the Avengers Are Wearing Those White Suits in the New 'Endgame' Trailer

Mar-Vell disguises himself as a recently-deceased human named Walter Lawson. But Mar-Vell was also enhanced with Kree tech, which gives him abilities that on earth look a lot like superpowers. He soon uses those powers to save a bunch of people, and because they mispronounced his Kree name, he became known as “Captain Marvel.”

Mar-Vell goes to work for NASA, where he meets Carol Danvers, NASA’s head of security. He develops feelings for Carol, and sympathy for humanity as a whole, and eventually turns on the Kree to protect the earth. A lot of crazy-as-hell comic book stuff happens over the years, and he even becomes the arch enemy of Thanos (yes, that Thanos).

Unfortunately, during one of his adventures Mar-Vell was exposed to powerful carcinogens, and because he was considered a traitor, the Kree denied him access to their advanced medical technology. So, unusually for a major comic character, Mar-Vell died for real, from cancer, in Marvel Comics’ first-ever graphic novel, 1982’s “The Death of Captain Marvel,” written by Jim Starlin.

Mar-Vell’s death cleared the way for a new hero to take over as Captain Marvel — but it wasn’t Carol (yet). Created by writer Roger Stern and artists John Romita Jr. in 1982, the second Captain Marvel — and Marvel’s first African-American female superhero — was Monica Rambeau. 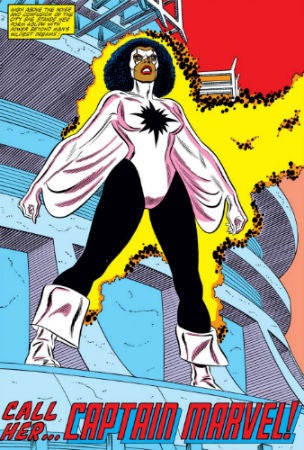 Monica is a New Orleans Harbor Patrol lieutenant who gets exposed to extra-dimensional energy that gives her super speed, the power of flight, and the ability to transform into any form of energy within the electromagnetic spectrum.

Stern and Romita initially drew inspiration from actress Pam Grier, but went much more glam than noir with their final design. As you can see, Monica adopts a completely dope black and white costume that is easily one of Marvel’s most iconic 1980s visuals. Though she eventually tones down the (awesome) Earth, Wind & Fire aspects of her first costume, Monica sticks with a variation on that striking color scheme in every subsequent costume.

Called the new Captain Marvel by the media, Monica accepts the moniker and with Spider-Man’s help begins training with The Avengers to get her powers under control.

Monica was even appointed the leader of the Avengers for a while, but in a 1988 storyline, she lost her powers and stepped down. Luckily she got them back, plus a few new ones, and returned a year later as the star of her own series, “Captain Marvel” vol. 2, which lasted from 1989 to 1994.

Monica eventually goes through several name changes: In a 1996 storyline she adopts a new superhero name, Photon; in 2006 she becomes Pulsar; and since 2010 she’s been best known as Spectrum. And yes, she still rocks an amazing outfit. You can read a lot more about her here.

Monica, of course, appears in “Captain Marvel.” Played by Akira Akbar, she’s the young daughter of Carol’s best friend and fellow Air Force pilot Maria Rambeau. She doesn’t get up to any heroics, but the film clearly sets her up for a potentially larger role in the future of the MCU — especially since her mother’s callsign was, wait for it, “Photon.” 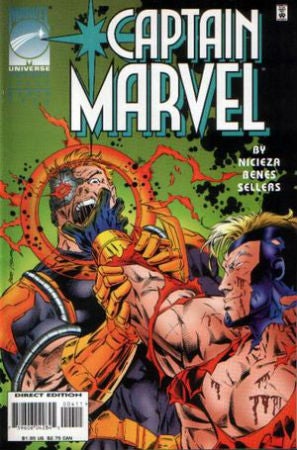 Monica became Photon is because of Genis-Vell, the son of Mar-Vell, created in 1993 by Ron Marz and Ron Lim. Genis started calling himself Captain Marvel, he and Monica argued about it, and eventually out of respect for Mar-Vell, Monica let Genis have it.

Awkwardly, Genis later started calling himself Photon. So, once again, Monica let Genis have the superhero name she was already using. It’s a, uh, weird writing decision, but at least it eventually got us to the much cooler Spectrum.

The next three Captains Marvel are a too convoluted to get into here, but briefly:

Which finally brings us back to Carol Danvers, and the hero she inspired, Kamala Khan. 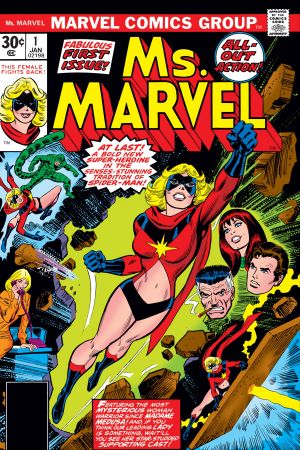 Created in 1968 by Roy Thomas and Gene Colan, Carol starts out like her movie counterpart as a former air force officer.

Unlike the film, where her powers come from the Tesseract (read all about that here), in the comics Carol leveled-up the old fashioned way: by being bombarded with radiation. She’d been taken hostage by Mar-Vell’s nemesis, Yon-Rogg (played by Jude Law in the film), and as Mar-Vell tried to rescue her, she was exposed to a Kree weapon that, essentially, turned her half-Kree.

Though canceled two years later, it was groundbreaking for its expressly feminist subject matter, including Carol’s fight for equal pay in her civilian identity. After the series ended she was a frequent player in “X-Men” and “Avengers”-related stories — most notoriously in a hugely-criticized 1980 storyline where the Avengers fail to recognize she’d been brainwashed and raped.

Also Read: 'Captain Marvel': What the Hell Actually Is a Flerken?

(Thankfully, “Ms. Marvel” writer Chris Claremont undid this a year later in a story that has Carol angrily confront the Avengers for their failure to see what happened.)

Over the years Carol assumed other hero identities — Binary in 1982, Warbird in 1998, and a return to Ms. Marvel in 2006. She finally became the official, undisputed Captain Marvel in a 2012 storyline too convoluted to summarize here, and, judging from the $575 million-and-counting box office of the film, she’s likely not changing back any time soon. 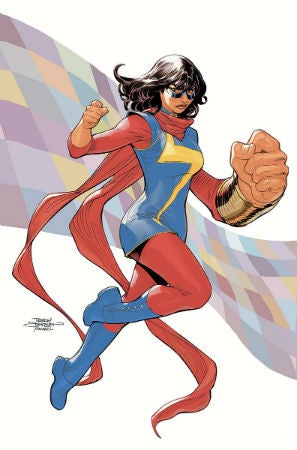 Exposure turns Kamala into a polymorph — she can deform, expand, or compress any part of, or her entire body into any shape she can imagine. Already a huge Carol Danvers fangirl, Kamala calls herself Ms. Marvel in tribute to her idol and gets to work saving civilians. She must now balance the responsibilities of school, friendships, her familial relationships, and her cultural heritage while saving lives as a masked hero.

She’s big deal for the Marvel universe, not only because of her powers and dope costume. She’s the first Muslim hero to headline a Marvel series, and helped spearhead a serious push by the comics publisher for greater diversity and representation in its titles. And she’s also the focus of some really authentic, genuinely touching coming of age tales.

And before you ask, she doesn’t appear in Captain Marvel, but she’s had something of a mentor-student relationship with Carol Danvers in the comics. Here’s hoping when “Captain Marvel” gets its inevitable sequel, Kamala will make her big screen debut too.