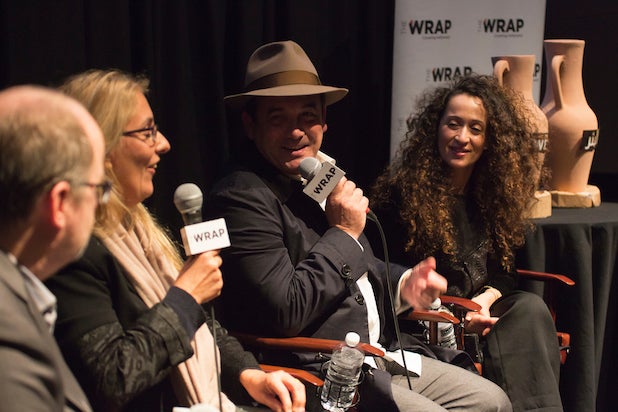 "The Well" director Lotfi Bouchouchi and actress Layla Metssitane holding a q and a held at the Landmark Theatre hosted by The Wrap.

In making “The Well,” Algeria’s Oscar submission for Best Foreign Language Film, director Lotfi Bouchouchi wanted to tell the story of the Algerian Revolution from a more novel perspective than the typical war movie, namely that of the innocent women and children caught in its crossfire.

“I wanted to express how stupid and how painful wars are,” Bouchouchi said Wednesday night in a Q&A with TheWrap Awards Editor Steve Pond. “The civilians always suffer.”

Algerian actress Layla Metssitane says she was drawn to her role because films about the period, like the acclaimed “The Battle of Algiers (1966),” typically focus on the heroes of war, typically male.

“Women are always at stake in every conflict,” she said. “In memory, women are forgotten, and with this movie, their memories are rehabilitated.”

Set during the Algerian War, “The Well” opens with Metssitane’s character in a state of emergency. French soldiers have surrounded an Arab village, water supplies have been cut, and anyone who leaves will be shot by a hidden sniper — meanwhile, the villagers are harboring several dead soldiers’ bodies at the bottom of a well.

But more pressing for this mother is that her son has vanished. With all men from the village off to fight the war, it’s the women who take front and center in Bouchouchi’s harrowing film.

“The Well” depicts not just the dilemma faced by the Arab villagers, but also that of the warring French commandos who have to make a difficult moral decision to imprison the town in order to preserve their own lives. One scene depicts the gruesome torture of an Algerian rebel; a French lieutenant toys with the prisoner by suggesting that he’ll shoot off his testicles one by one so that he can see himself “lose his descendants.”

While not based specifically on a true story, Bouchouchi explains the film is a composite of war accounts and that everything that occurs was horrifyingly plausible.

“This movie has been shown in 20 countries, and the reaction has been the same all over the world,” Bouchouchi said via a translator. “It’s a movie about humanity, and it’s universal. It’s an Algerian story because I’m Algerian, but it’s a story for every person and every country.”

Bouchouchi both directed and produced the film, his first feature after a long career of directing commercials and shorts.

“If you don’t also do the production part, you’re never going to make the film,” Bouchouchi said, explaining that in Algeria they don’t have the same tools, resources or infrastructure of Hollywood.

“Doing a movie in Algeria is itself an act of resistance,” Metssistane said.

TheWrap's Screening Series features the most significant films of 2016. Screenings are followed by question-and-answer sessions with the film's talent. The films are open to members of the Academy of Motion Picture Arts and Sciences, the DGA, PGA and WGA members, and to subscribers to TheWrap's daily email newsletter, First Take.