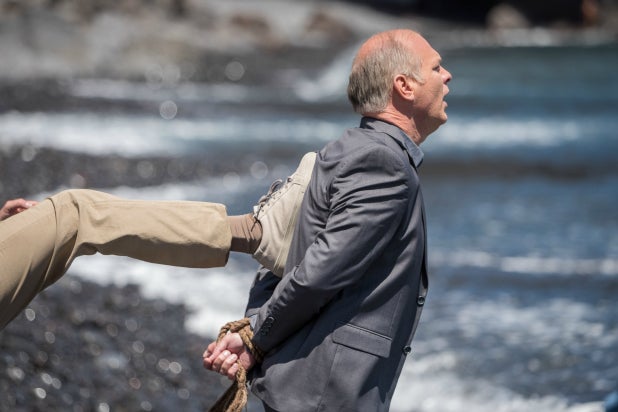 There’s plenty of wit to be found in the films that constitute the Romanian New Wave, but any laughs they elicit wind up sounding more like dry coughs. These movies tend to find their humor in subjects like an overburdened health-care system (“The Death of Mr. Lazarescu”), corruption in the education system (“Graduation”), family strife (“Sieranevada”) and other topics relevant to the nation dealing with the lingering aftereffects of the Ceausescu era.

So even if writer-director Corneliu Porumboiu seems more amenable to absurdist comedy — and genre conventions — than his peers in this talented community, his latest film “The Whistlers” still traffics in bleak chuckles.

It’s a wonderfully labyrinthine story of cops and robbers that might not be an official sequel to Porumboiu’s 2009 “Police, Adjective” (that year’s Romanian Oscar entry), but it does explore many of that film’s concerns, from the subtle distinctions between law and justice to the way language is used to create barriers rather than build bridges.

Also Read: 'The Whistlers' Director on How a Documentary and a Lot of Classic Noir Films Inspired His New Comedy

If you’ve never experienced this incredible moment of Romanian cinema, “The Whistlers” is as good a place as any to start: It’s much less bleak than “4 Months, 3 Weeks, and 2 Days” — probably still the masterpiece of the Romanian New Wave — and the Canary Islands locations offer more pleasing vistas than long shots of a Bucharest skyscraper. And given how much Porumboiu’s screenplay jumps around in time and drops key information in subtle asides, it’s a film that demands the same level of audience attention and investment as any of that country’s most oblique films.

Vlad Ivanov (who co-starred in “Police, Adjective” and won acclaim for his role as the fearsome abortionist in “4 Months”) stars as Cristi, a Bucharest policeman who we first see arriving at the Canary Islands to learn a whistling-based language that criminals use to communicate with each other. Through flashbacks and flashforwards, we learn that Cristi is involved with a drug-smuggling and money-laundering ring being run through a mattress factory, and that his involvement with the seductive Gilda (Catrinel Marlon) begins as strictly business for both of them but soon blossoms into something else.

When they first meet, she has to pretend to be a high-priced sex worker, since he’s being tailed by the police over illicit funds. They have to take the ruse all the way, as it were, since his apartment has cameras and listening devices peppered throughout. By the end of the film, of course, we discover that surveillance is ubiquitous, even at police headquarters.

The whistling-language classes are fascinating, with sibilant tones being used to substitute for various vowels and consonants, and Porumboiu’s interest in language and its power to exclude as well as include provides a great deal of subtext, particularly when Cristi has to whistle to Gilda in Romanian, which she will in turn translate into whistled Spanish. (English is the only common language between Cristi and his teachers, but for some reason, they don’t whistle in it.) The notion is similarly explored via a motel-keeper who blasts Offenbach in the lobby; opera itself is presented as a language that either draws in or repels people.

Cinematographer Tudor Mircea (“The Treasure”) seems invigorated by the location shooting, giving Bucharest a bit more of a gleam than it’s usually given in these New Wave films, which mostly seem to take place on the coldest day of winter, under a concrete-colored sky. (A climactic shoot-out takes place on a movie set, acknowledging that the country has become a magnet for low-budget international productions. There’s also a dark joke about a visiting filmmaker on a location scout.)

Ivanov is riveting as a man who answers to two opposing sides while remaining the most honorable person in the film — not for nothing does he set up a secret meeting at a screening of “The Searchers” — and Marlon balances compassion and sensuality as a femme who’s not entirely fatale. (Not for nothing is her character named “Gilda.”) Rodica Lazar (as Cristi’s corrupt boss) and Julieta Szönyi (as Cristi’s mother) are completely on Porumboiu’s comedic wavelength, drily revealing the irony of the film’s complicated moral stance.

The characters in “The Whistlers” turn language into music; Porumboiu does something very similar with criminality and corruption.