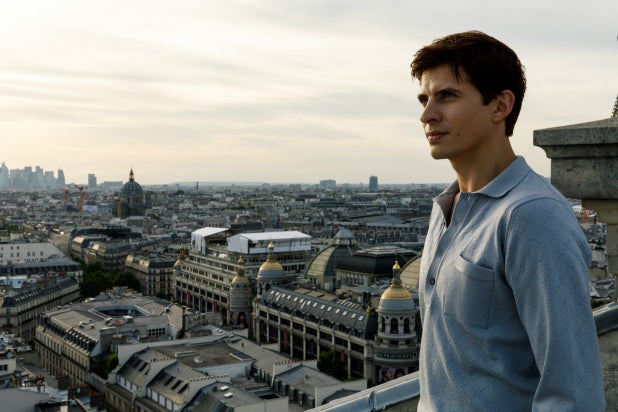 We are still in the beginning phases of a reckoning with toxic masculinity that may take years to dismantle, and yet there is a persistent desire to move past it and to attempt to understand the problematic male genius on screen. We’re currently seeing it on the small screen in the new FX series “Fosse/Verdon,” and now on the big screen with “The White Crow.” And it is a chore to get through both.

The Ralph Fiennes-directed movie aims to illuminate the life of ballet dancer Rudolf Nureyev (Oleg Ivenko), who left his poverty-stricken childhood in the Soviet Union behind in 1961, in the midst of its tumultuous political climate, to defect to the west in Paris. Fiennes and screenwriter David Hare are very deliberate about showing us, through flashbacks, his Saint Petersburg upbringing, where he and his three sisters shared one bed and their mother ventured out in the middle of a snowstorm to find food for her family. It’s intentionally heartbreaking and manipulative, albeit necessary to tell his story fully. We also see him as a young boy auditioning for a company in Russia, when his talent superseded his age, and he was able to make even his fatigued mother smile.

But these sentimental memories are interwoven with Rudolf’s adult years as an ambitious rising star who basks in his own celebrity and inflated ego which he uses to condescend his fellow ingenues and female admirers alike. It’s grating. There is one scene in particular in which he and his friend Clara Saint (Adèle Exarchopoulos, “Blue Is the Warmest Color”), a revered Parisian in her own right, are at dinner where Rudolf is barking at the waiter for not preparing his food correctly and even accuses him of looking down on him because he’s Russian. He’s absolutely intolerable and punctuates the rude moment by calling Clara “Sweetie” and lecturing her when she tries to reason with him about his behavior.

We’re led to understand that much of Rudolf’s actions are attributed to his deep-rooted insecurities of not feeling like he belongs among the French elite and a very real fear that he could be sent back to Russia by the KGB at any given time for even the smallest infraction, which is something he likens to death. As horrifying as that is, it’s hard to sympathize with a man who literally spits in the face of a woman who doesn’t tell him exactly what he wants to hear when he wants to hear it.

Even during Rudolf’s most vulnerable moments, like when he is lying in bed with his lover Teja (Louis Hofmann), a compassionate dancer at the company who’s eager for Rudolf’s attention, he is bitter and aloof. But then that moment is complemented by Barney Pilling’s (“Annihilation”) astute editing that brings us to a counterpoint scene: when Rudolf falls under the clutches of renowned dance teacher Alexander Pushkin (Fiennes) and his lecherous wife Xenia (Chulpan Khamatova). The film’s constant waltz between moods is aggravating at best. It becomes unclear whether we are even supposed to root for Rudolf, or if it matters that we do.

Also Read: Joseph Fiennes and Sir Ranulph Fiennes to Travel Down the Nile for Nat Geo

“The White Crow” culminates in a dramatic scene at the airport, inspired by real-life events, where Rudolf is forced to face his worst fear — being sent back to Russia as the rest of the Kirov troupe travels on to London. There is very little explanation for what was the tipping point for the KGB (perhaps his affairs with men or his general insolence or non-conformist ways) but by this point in the film, when we’ve been drained of any empathy we could have had for him, it’s difficult to care either way.

The sequence is so long — complete with Clara being summoned from her home to use her connections to free Rudolf in a grandiose and utterly unwarranted gesture, given his treatment toward her — that it’s exasperating to watch. If you’re familiar with Rudolf Nureyev’s real-life story, then you already know he ultimately managed to attain political asylum from the French authorities.

“The White Crow” struggles to tell Rudolf’s story with reverence, as it highlights moments in his early career when he escalates to the top ranks at his company with artistic elegance while not masking his callousness. It’s a tug-of-war between illuminating his personal flaws and celebrating his excellence as a dancer. This begs the question: Can we truly honor him despite his overall severity that undoubtedly caused many around him such pain? Rudolf Nureyev was certainly gifted and deserves to be revered for that alone. But his talent was propelled by a fear of what could happen if he failed, a dire circumstance that doesn’t always elicit pity in the film due to his behavior. So why tell this story now?

Neither of these questions are really answered in the film, which makes it an even more puzzling watch. On top of that, the performances across the board are wooden, perhaps to highlight the iciness of the characters, but it makes it look like there was no chemistry between any of the actors. The most effective moments are when Rudolf is a young boy, which only succeed at reminding us that even the most inspirational talent could eventually turn into our problematic fave.