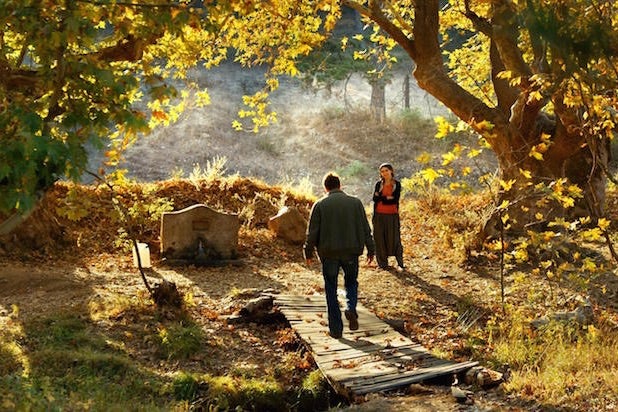 Timing is a funny thing.

Take director Nuri Bilge Ceylan, whose latest film “The Wild Pear Tree” was the final film to screen in competition at the Cannes Film Festival on Friday night.

He took home the Palme d’Or with his previous work, 2014’s “Winter Sleep,” so you could hardly call his last trip to Cannes a failure. However, you could argue that that award winner — a searing indictment of male entitlement, ego and privilege — might have come out a few years too early.

The market will always be tough for verbose Turkish dramas that are more than three hours long, but you’d have to imagine that the many thematic overlaps between “Winter Sleep” and our ongoing cultural conversation might have pushed that talky drama a bit further into the spotlight.

Alas, that was not the case for “Winter Sleep” and will not be the case for “The Wild Pear Tree,” which has plenty of the former’s verbose sprawl with little of its gravitas and heft.

Like “Winter Sleep”, the narrative focuses on a flawed middle-aged man and his harmful impact on those around him, only this time the protagonist is one of the victims (as it were) and not the perpetrator.

We follow Sinan (Aydın Doğu Demirkol), an aspiring writer newly graduated from university, as he returns to his family home to begin his adult life.

Here, adult life is synonymous with disappointment as Sinan, described by one character as “an incurably obsessed romantic,” begins to put together that things aren’t guaranteed to work out. The young man may still have his life before him, but it will probably not be successful on the terms that he’s set for himself.

Following Sinan through long conversations with friends, family and associates, Ceylan crafts a narrative of disillusionment. Every rambling talk lays bare another former support that has let the young man down. Sinan doesn’t spare the local imams nor his professional mentors, but no single person becomes a more targeted focus of ire than his gambling-addicted father, Idris (Murat Cemcir).

Sinan looks to schoolteacher dad with a wash of anger, pity and fear. Anger for all that Idris’ habit has cost his family, pity for the way the older man can’t even own up to his addiction and most of all fear — fear that his father’s fate awaits Sinan as well.

“You feel sorry for him,” Sinan says of Idris. “Sorry for him and exasperated at the same time.”

Frankly, the film’s glacial pace can exasperate too. What worked so well in “Winter Sleep” feels significantly more trying here. In his 2014 Palme d’Or winner, Ceylan unpacked thorny issues of ethics and morality with a surgeon’s steady patience; he employs a similar approach here, only the territory is much less fertile.