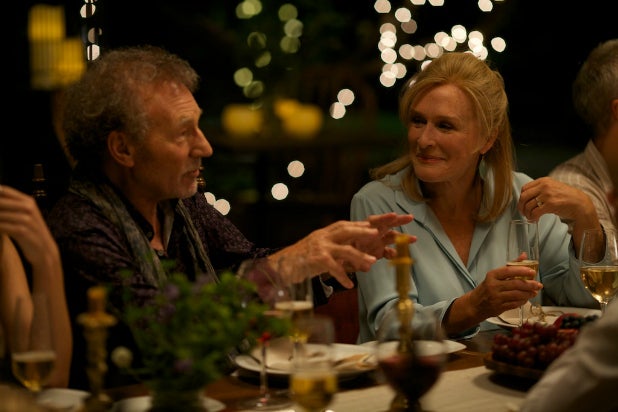 In the movies, when families come together, zaniness ensues — and it’s usually predictable to the point of tediousness. When you see above-the-title names such as Glenn Close, John Malkovich, Minnie Driver, and Patrick Stewart, however, you think, Will it be…? Could it be…?

The answer is no.

At least that’s true in the case of “The Wilde Wedding,” whose very title serves as a double entendre for nuptial-related shenanigans. Written and directed by Damian Harris (“Bad Company”), the farce revolves around actress Eve Wilde (Close) and her fifth marriage, to novelist Harold (Stewart, with a highly unflattering head of gray curls). In addition to each party’s large, and largely grown, families, Eve has invited Laurence (Malkovich), a fellow actor and her first husband, to her palatial beachside retreat.

The film kicks off with an irritatingly affected, fourth-wall-breaking monologue by Mackenzie (Grace Van Patten, “The Meyerowitz Stories”), Eve’s granddaughter. Mackenzie is shooting a video of the weekend as a wedding present; considering the randomness of the footage she captures, she would have made a better impression had she gone for that toaster.

(At one point, she turns the camera off and breaks the fourth wall for the second and final time, talking about when she kissed her hunky cousin the previous summer. “It raises that age-old question,” she says. “Can you ever go back?” I counter: Is that really the question it raises?)

The bulk of “The Wilde Wedding” features various guests getting drunk and high and making out. The bevy of young women, particularly from Harold’s side of the family, like their skirts short and their much older targets giddy. No one shows anybody much respect, such as when the apparent girlfriend of Eve’s granddaughter greets her father for the first time with “Hey dude” as she hangs all over his daughter. Copious wine, pot, coke, and chocolates enrobing magic mushrooms encourage the bacchanalia. And table dancing — remember those short skirts? — to a Latin-flavored version of Billy Idol’s “White Wedding” performed by Driver’s “rock goddess.” (Just ignore those “shotgun!”s.)

These roles are a walk in the park for Close, Malkovich, and Stewart, especially for the lady of the triangle. Her suitors old and new have to pull off a few drunken scenes, but nothing too taxing.

Watch Video: Watch John Malkovich Scare the Bejeezus Out of Kids as a Party Planner

Driver’s rocker winds up supplying most of the film’s spare laughs; her Priscilla is not the warmest mother to her beyond-his-years young son (Jake Katzman, “The Adderall Diaries”), and she has a great scene involving cigarettes, texting, chanting, and meditation. Peter Facinelli, Yael Stone, and Noah Emmerich are also part of the brood, with roles that could have been just as satisfactorily filled by anyone with a SAG card.

In the prolonged last chapter, what-could-have-beens and what-will-bes are on the minds of the characters, with any momentum the film has built stopped cold by lengthy conversations. But the finale, though a bit cheesy and decidedly telegraphed, is sweet and a welcome antidote to all the bare-skinned romping. Bad behavior might be de rigueur at weddings, but it all gets tiresome when the antics go from bad to “Wilde.”