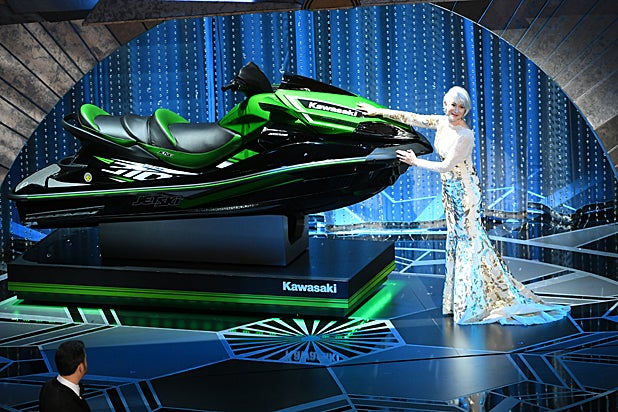 It turns out that jet ski Jimmy Kimmel promised to give out to the Oscar winner with the shortest speech wasn’t a gag after all.

Costume Designer Mark Bridges was the winner of that Kawasaki that was a running joke that Kimmel teased in his monologue Sunday night, and kept circling back to throughout the show. Bridges, who took home an Oscar for Best Costume Design for “The Phantom Thread,” held the top spot for most of the night with a lightning fast 36-second speech.

With an assist from former Oscar winner Helen Mirren, Kimmel told the 2018 winners that if they were able to keep their speeches short, he’d give them a brand new jet ski. Valued at just under $18,000, the host presented the product in a showcase similar to “The Price is Right.”

Beginning with Best Supporting Actor Sam Rockwell’s speech — which clocked in around a minute-and-a-half — Kimmel kept his word and used his stopwatch to time him.

Over the course of the ceremony, Kawasaki tweeted out the leaderboard, which showed Bridges for most of the night. Jordan Peele referred to the jet ski in his speech after winning Best Original Screenplay, as did Kristen Anderson-Lopez when she accepted her award for Best Original Song for “Remember Me” from “Coco.”

Although it was unofficial, the Academy actually did give out a prize for the shortest speech once before.

Producer Gil Cates announced at the Oscars Nominees Luncheon in 2001 that the Academy would award a flatscreen TV to the person who made the shortest acceptance speech. A Dutch animator, Michael Dudok de Wit, won the Oscar for animated short (“Father and Daughter”) and took home the TV. Dudok de Wit’s speech was a grand total of 18 seconds. He wasn’t at the nominees’ lunch, so he didn’t know about the prize, and didn’t want to ship it home to the Netherlands. Instead, he gave the TV to Hollygrove, L.A.s oldest non-sectarian residential facility for abused children.

David Letterman wanted to give away a car on when he hosted the ceremony in 1995, but the segment was cut during rehearsals.