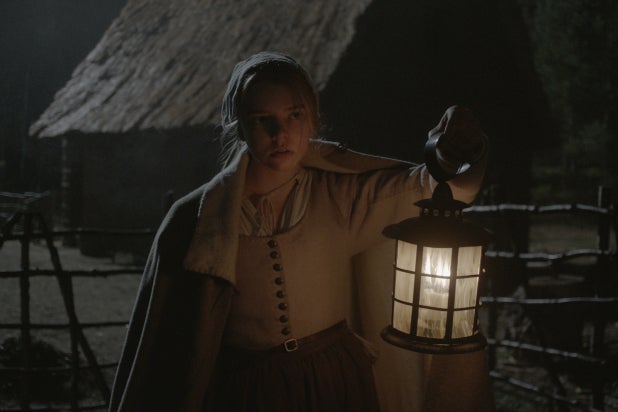 A Puritan family is cast out of their community, and they are forced to take refuge near a sinister wood. There is stern father William (Ralph Ineson), his equally stoic wife Katherine (Kate Dickie), their blonde daughter Thomasin (Anya Taylor-Joy), who is blossoming into womanhood, her younger brother Caleb (Harvey Scrimshaw), and two bratty younger twins. To round things off, the family also has a newborn baby. Eggers lets them all speak in a “thee” and “thy” fashion that can be hard to understand at first, but this archaic language does finally add to the alien feeling created by the otherworldly images.

Times are hard and Bibles are thumped, and the family isn’t getting enough to eat. We see Thomasin playing with her newborn brother, but then the baby seems to magically disappear. (The editing in this sequence is effectively disorienting.) There is a shot of the baby on its back, and then a withered hand comes in to hover over it before picking up a knife. We see the nude body of an old woman from the back, and the layered musical score by Mark Korven starts to shiver and howl on the soundtrack. What we see suggests the presence of evil, and the music heightens it.

The family is distraught over the missing baby, and they wonder if a wolf might have gotten to it. The opening scenes of “The Witch” have a bone-white look, but as the tension mounts, Eggers darkens his frames and keeps returning to shots of the woods beyond the house. He hints that the pressures on this family and the fanatical repression of their lives is what must be feeding or even creating the evil forces in the forest, the malignancy that starts to press down on them. 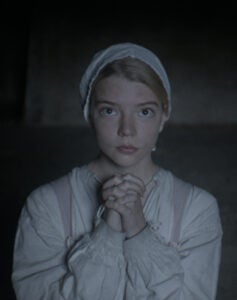 To these people, sexuality is the deadliest sin of all, the easiest way for Satan to waylay you, and so it makes sense when Caleb drifts into the woods and sees the witch of the title, who appears as a pleasingly busty beauty in a red riding-cape.

Eggers puts demands on all of his actors as the events in “The Witch” intensify, but none more so than Scrimshaw, who has to sustain an extraordinarily intense scene of demonic possession, reaching further and further into his own fear and desire until he can stand it no more. His father and mother are still looking to their religion to help them, asking God to humble them even more so that grace might enter their lives, but they are no match, finally, for the witch in the woods, or for the rebellious Thomasin, who might be starting to get a little witchy herself.

“The Witch” is a movie that isn’t afraid to go to some dicey emotional and sexual places in its pursuit of its theme, and it has the sense to let some things remain unexplained because they are scarier that way. Eggers leaves it to us to judge Thomasin and her position in the story, which changes steadily as it goes on. There is some expected blood shed by the end of this picture, but also some that comes when you least expect it.

Puritan-era New England is such a foreign time and sensibility to most of us that “The Witch” could very well be taking place on another planet, and it’s an exceptional movie for taking full advantage of that strangeness, never adding any modern reassuring touches; it’s an atmosphere where making a deal with the Devil seems all too plausible. This is the kind of serious horror movie that will live in your head for days afterward, like a bad dream that’s difficult to shake.