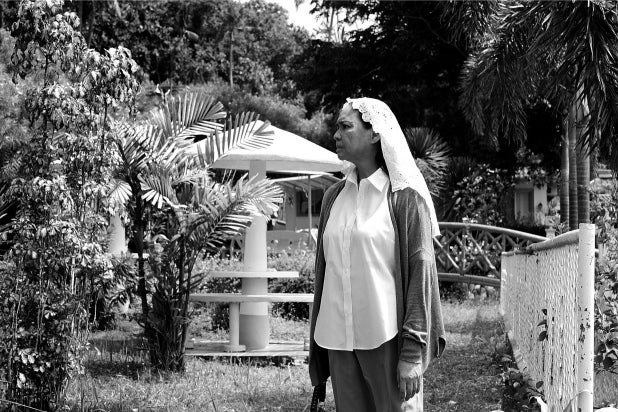 It’s 1997, and Great Britain is ending its rule in Hong Kong. The political world is shifting, possibly on the brink of something, and a radio playing in a women’s prison in the Philippines announces this information during the opening moments of “The Woman Who Left.”

The next report details a rash of kidnappings targeting the rich, the business class, and moneyed tourists. But for Horacia (Charo Santos-Concio) nothing has changed at all, and her existence is relatively peaceful, considering her constrained circumstances. In the 30th year of a life sentence for a murder she didn’t commit, she’s a caretaker to her fellow prisoners, teaching and tending to the women in her compound as the radio drones on.

When her best friend delivers a letter to the warden, confessing to the murder and explaining that Horacia was framed by a jilted ex-boyfriend, Horacia is exonerated and immediately released back into a world she doesn’t know anymore. Her adult daughter is confused by her mother’s abrupt return, Horacia’s husband has died, and her adult son has gone missing. Left adrift, her next stop is street justice for the man who destroyed her life. Selling property she owns to fund the journey, she embarks on a quietly anonymous mission, assuming more than one new identity and name in the process.

The makings of a genre exercise in revenge and suspense — one filmed in a high contrast black and white to emphasize the noir elements of the story — are only the external markers of the latest from Filipino auteur Lav Diaz. The director is known among critics and arthouse audiences as the creator of convention-defying marathons that stretch as long as six and eight hours (this one is a relatively short 228 minutes), motionless shots that frame his characters as lone figures whose feelings are never up for easy scrutiny, and a deliberate pace that will drive the impatient to madness or submission. He makes you wait for it.

Waiting, as it happens, is something Horacia knows how to do very well. Tracking her ex, a rich, powerful man named Rodrigo (Michael de Mesa), she learns that the epidemic of kidnappings has turned Rodrigo into a prisoner himself. Confined to a luxurious house, he leaves only to go to church. A white lace headcovering providing a fairly flimsy disguise, it’s there during mass that she watches him, considering her options, living with her own ambivalence.

In the meantime Horacia cares for an array of broken people she meets as she wanders the neighborhood: a poor street vendor of balot eggs; a woman who runs a roadside food stand; a homeless woman whose mental illness causes her to rant incessantly about demons taking hold of humanity; an impoverished family living in an open-air shack; and a young, self-destructive, transgender woman named Hollanda (John Lloyd Cruz) in desperate need of Horacia’s mothering.

Taking Leo Tolstoy’s 1872 short story, “God Sees The Truth, But Waits,” as inspiration, much like he did with Dostoyevsky’s “Crime and Punishment” for 2013’s “Norte, The End of History,” Diaz’s moral universe, immersed in the specifics of Philippine politics and the lives of everyday people, is one where grand themes play out in small, nearly imperceptible actions. Instead of methodically plotting Horacia’s revenge, ramping up tension, Diaz keeps his heroine busy skulking around in the dark.

She buys eggs from the street vendor to deliver to the poor family. She gives the homeless Mameng (Jean Judith Javier) a bath. She nurses Hollanda back to health after a brutal beating and gang rape. Each act of mercy weighs the efficacy and satisfaction of settling the score against the understanding of what goodness requires. Almost by default, Horacia’s path leans toward the direction of forgiveness.

Diaz casts his film with as much attention to pointed opposition as with his choice of stark black-and-white cinematography. Charo Santos-Concio is a well-known media mogul and TV host, taking on her first acting role since 1999, and cast against every currently known element of her existence. Michael de Mesa is part of a famous Philippine acting family, and John Lloyd Cruz one of the country’s hottest male box-office draws.

Famous faces assembled, Diaz then denies them their close-ups. The camera remains solemnly in place as the blackest night envelops the actors, and Santos-Concio fully inhabits the idea of loneliness and loss.

Reflexively giving everything she has, Horacia’s night rounds create a new family of outcasts. She buys a gun, ostensibly to finish her task, inching her way toward assuming the mantle of Lady Vengeance, even as she becomes a Christ figure who blanches at minor eruptions of the violence that lives inside her. And Diaz piles on the biblical allusions one by one, not flinching from the contradictions.

Hollanda, physically broken by her ordeal, describes herself in biblical terms as a “stranger” in need, one that Horacia has saved. The street vendor asks Horacia if she’s an angel, Batman, or the Philippine folkloric monster, the Aswang. The homeless Mameng describes her as one of the good ones. And Horacia’s response is usually silence, save for one sweetly moving moment when she teaches Hollanda to sing “Somewhere” from “West Side Story.”

As a revenge noir, “The Woman Who Left” is both satisfying and confounding, emphasizing the genre conventions it likes, blowing off the rest, and taking its mournful time doing it. Diaz has made an epic-length small film about the powerless, one full of moral urgency that he chooses to elongate and slow down to a crawl. It’s a quiet consideration of grief and mercy, of control taken and freely given up.

The news reports on that radio crackle up in quiet moments, an endless story of the missing rich, the guilty benefactors of religious and political influence, while Diaz’s lone heroic woman with no name tends to the strangers missing in plain sight.