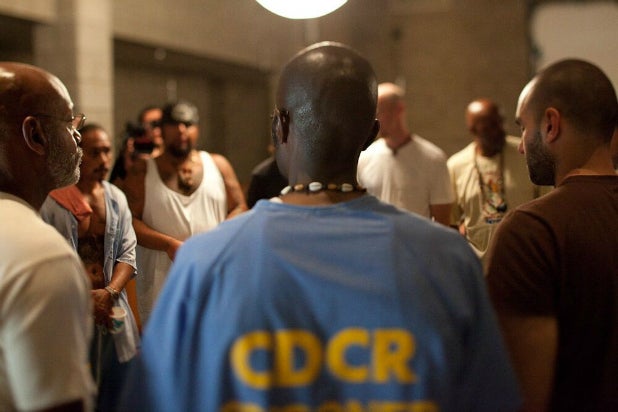 The line of men quietly strolling single-file into Folsom Prison in the opening scenes of Jairus McLeary’s documentary “The Work” don’t look happy. And they’re not; they have issues.

But they’re also not convicts. They’re outsiders who have traveled to Sacramento, Calif., from around the country to participate in a four-day intensive group therapy with convicts, aided by trained facilitators.

It’s an admittedly arresting concept in healing — mixing maximum-security criminals with free men in a safe space outside the rules of the yard, to see where their emotional pain converges — and it’s one that McLeary and credited co-director Gethin Aldous make easily riveting in this vérité reportage. Though “The Work” leaves a lot unanswered about this unusual program (run by the Inside Circle Foundation) and the characters who participate in it, it’s an often tense and exhilarating glimpse into a moment in time that lets men prioritize honesty and tears over superficial displays of strength.

McLeary, whose psychologist father James was one of the program’s designers (and is featured in the film but not credited as a relation), focuses on three outside visitors: Charles, a sad-eyed African-American bartender and father from south central L.A. whose view of prison is tinged by an incarcerated father he never knew; Brian, a coiled teacher’s assistant from Chicago with a competitive, judgmental side he knows is unhealthy; and a soft-spoken museum associate named Chris, also from Chicago, who feels crippled by indecisiveness.

Alongside them on the inside for the four days — two assigned to each outsider as guardians/guides, men “willing to go with you,” as co-founder Rob Allbee tells them — are an assortment of tattooed, bulked-up hardcases, including lifers, who have sworn to put political, racial and gang-affiliated differences aside for the therapy’s duration.

They include a former Aryan Brotherhood inmate named Rick, a long-time program participant who relishes these opportunities to be “authentic,” and not who he has to be in the yard for survival, and “Vegas,” a former Bloods shot-caller with a natural ability to draw out others’ emotions. (After Brian deflects a question from Vegas about what he wants from the experience, Vegas waits till Brian gets up to get a drink before confiding in his co-guardian with a knowing laugh, “We got one, a real live wire.”)

Adding to the established diversity of the program’s makeup is a Skins (the Native American prison gang) member called Dark Cloud, a beefy, plainspoken inmate who is looking to be more vulnerable. Participating in his first intensive is Kiki, member of a Pacific Islander prison gang, who has never been able to mourn his sister’s death. As a protective circle of empathizing badasses surround him, Kiki lets his eyes go soft, and a facilitator tells him to relax his jaw and breathe. When he crumples to the ground, they squat in sync, to be at his level.

The damage wrought upon fatherless sons is a big part of “The Work,” as are screaming-crying jags. Some get to that raw place willingly, while others — like visitor Brian, whose attitude initially doesn’t earn him any quick friends — need to be pushed a little toward opening up. There are a handful of circles operating at once, and at any time tortured howls can be heard in the background from other groups while McLeary’s camera is trained on his subjects. No one bats an eye.

Also Read: Anthony Weiner Gets 21 Months in Prison for Sexting With a Minor

Sometimes the facilitators foster a kind of scrum hug while one of the circle rages in the middle, emptying his feelings, pushing back against the sympathetic weight of a half-dozen hulks. Though it sounds like a recipe for someone to lose control (and in one instance, Dark Cloud nearly does, scaring Brian), it’s surprising how committed the convicts are to a safe, friendly environment for no-nonsense soul-baring.

When Vegas and a distraught young lifer named Dante hug after a weepy confessional, the muffled mics stifle their speech, but pick up a pair of intensely thumping heartbeats. You can feel how meaningful this is for these men, who realize being imprisoned physically doesn’t mean they have to be jailed emotionally.

It’s easy to get caught up in the minute-to-minute visceral terrain of “The Work” and forget that other details aren’t being fleshed out. No history of the program or instruction in its therapeutic ideas is given separately, and only the sketchiest facts are provided about convicts’ and outsiders’ histories. It’s never made entirely clear why, in fact, the the two together — inmates in therapy with civilians — is supposed to benefit both. If it isn’t unloaded in therapy and on camera, in other words, “The Work” doesn’t provide it.

Even a curious cardboard sign Dante holds that reads “Ladies Please Write Me” isn’t explained; again, maybe because it would directly acknowledge that they’re being filmed. But McLeary and Aldous allow shots that include camera operators, so it’s not as if the illusion is entirely maintained. But at heart, this is a simple, tense, gritty auditing of a collective unburdening that obviously brings some needed clarity, and the promise of rehabilitation, to some hurt, searching souls.