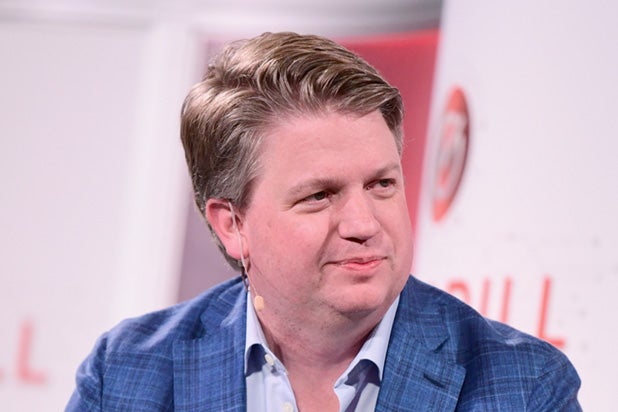 When the country is battered by storms, The Weather Channel has meteorologists on the ground. And that’s no small task when the storms are as devastating as the three hurricanes that swept through the Caribbean and the Gulf Coast in recent weeks.

Weather Channel CEO Dave Shull said his network sent about 100 people to Texas, Florida and Puerto Rico to cover Hurricanes Harvey, Irma and Maria in the last month. Those crews required great amounts of support and preparation to face conditions on the ground not unlike those faced by war correspondents.

“They all have satellite phones, they have a bunch of cash,” Shull said at TheWrap’s 2017 TheGrill conference on Tuesday. “In Puerto Rico, the cell service went down, so people were no longer able to take credit cards. So where was the team going to stay? They had to pay cash to be able to get there.”

“It was tough, given the logistics there,” he said, adding that the network’s team of field producers are always closely monitoring weather forecasts, prepared to evacuate the location crews should conditions get too serious.

“We had a couple situations where we had to pull our teams back because we had water rising, and we were watching very closely, looking at the radar,” Shull said. “We had already established an escape route for them, and we exercised that a few times. We said, ‘Guys, the water’s coming up too quickly and we’ve still got rain coming in on the radar, you gotta leave.’ “

Despite those challenging conditions, Shull said it’s important to have meteorologists on location to convey to viewers the severity of the situation, to show that calls for evacuation need to be taken seriously. “It’s not just for TV, it’s meant to convey to people that it’s really, really serious.”

Field crews sent out to cover storms are supported from The Weather Channel’s Atlanta headquarters, operations that Shull described as “all hands on deck.”

“My whole executive team, whether it’s HR or the CFO or PR, they’re down in the war room,” he said. “I’m doing things like bringing water and making sure the pizza arrives. Because people need to know that we’re all in this together.”

“We’re monitoring with CNN, Fox and MSNBC, we’re listening to the control room,” he said. “We’re tracking where all the crews are and making sure they’re safe, moving them if we need to, and making sure they get fuel, food and cash. It’s a ’round the clock operation to make sure everything’s working the way it should.”

And, though it may sound crass, storms are good for The Weather Channel’s business. Through Harvey, then Irma, then Maria, the network worked overtime to make sure viewers were kept informed of the situation at all times, efforts that were rewarded by record ratings, Shull said.

“Of course, between Harvey and Irma, more than a hundred people died. So it’s a tough thing to talk about on air,” he said. “But we also had 70 million people tune in for Irma alone in that three-day period … It was half of Comcast, for example. A third of all American TV homes tuned in during that period.”

As CEO, Shull approaches all of The Weather Channel’s operations from a business perspective, but it’s a different story for his team of meteorologists.

“It sounds a little bit trite,” Shull said. “I’m a business guy, I’m a CEO trying to make a business work — but there’s such a sense of mission from the meteorologists. There’s such a sense that this is more to them than just business. This is about saving lives and making sure they get the information out to our viewers. And so they’re exhausted, they’re working around the clock.”

The story isn’t over once the storm passes, either. The network will revisit Puerto Rico in coming days to document the devastation caused by Hurricane Maria and report on the efforts to rebuild in its aftermath.

“We feel like that story that isn’t over, and we want to make sure it doesn’t get lost,” Shull said.