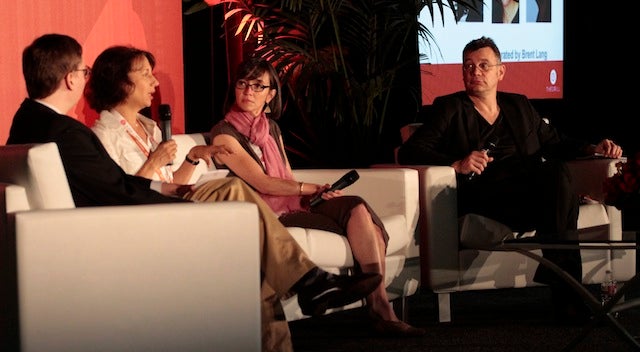 California offers filmmakers the best weather, the best crews and the full history of Hollywood, but there’s one thing it doesn’t offer: the best tax incentives.

Ever since other states began offering incentives to lure film and TV productions, California has fought hard to keep up, Amy Lemisch, executive director of the California Film Commission, said on stage Friday at TheWrap’s TheGrill@ Locations Show. “There is such high demand."

And it's not just other states that are the problem anymore. While the incentives California offers each year are “very effective” and “very competitive,” Lemisch said, the $100 million she has to play with is simply not enough.

(At left, Kotok and Priot.)

The U.K., Kotok said, has used tax incentives to lure some of the biggest productions each year, attracting blockbusters such as “Fast & Furious 6” and the upcoming “Star Wars” film.

Even a small amount in incentives can inject a large amount of new money into the economy of any nation, she said.

“If you’re giving out 1 pound in tax relief, you’re bringing in 12 pounds of vital money that helps support jobs. It helps create tourism.”

She cited “Game of Thrones,” which filmed in Northern Ireland, as an example of a show “that has come in and boosted the industry in and around Belfast.

“It supports the building of new facilities, training up new crews,” Kotok said. “Features want to shoot there; they know they have the expertise on the ground.”

Priot said that France was building towards “Star Wars.” When it started offering a rebate, it placed a cap of 4 million euros on any project. That has since increased to 10 million euros, which is roughly $14 million.

“We’re getting a lot of indie movies,” Priot said, citing Woody Allen's”Midnight in Paris” as just one example of a quality movie made in the country and argued that France has two inherent advantages in attracting productions — skilled crew and its appeal to foreign talent.

Studios movies remain the biggest hurdle, especially since many of the stars of those movies are monsters, aliens and gods. Priot joked that those monsters can come from “somewhere, anywhere — make it in France.”

“The challenge facing California, Lemisch said, is that the legislature has been unwilling to guarantee money far into the future. While the incentives program will continue in 2014 and 2015, there is no promise after that. She said the commission was asking for an extension but had received no assurances.

"Most producers tell me they’d prefer to be working here but can’t unless they are able to tap into some sort of incentive. We are limited in terms of funding.

“Everyone," she said, "needs certainty."