As chairman of production studio Electus, which produces both television and online programming, Ben Silverman is used to having one foot in traditional media and the other in digital.

Silverman talked about working both sides of the fence Tuesday during a panel at TheGrill, TheWrap’s Media Leadership Conference in Beverly Hills. He told the crowd that Electus has found success online with high-profile partners including Sofia Vergara and Eminem.

In fact, he announced during the conference that Electus has expanded its relationship with the Detroit rapper. 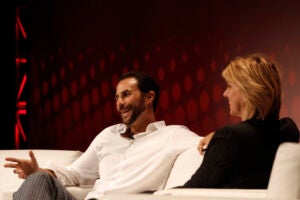 “Detroit Rubber,” which revolves around Midwest sneaker shop Burn Rubber, is also being developed in a longer-form version for Fuse, Silverman said during the panel, with a pilot for the project recently completed.

“Detroit Rubber” isn’t the only Electus project looking at an upgrade: Silverman also revealed that he’s closing in on a deal to bring one of the projects that he’s worked on with “Arrested Development” duo Will Arnett and Jason Bateman, to television. While Silverman didn’t mention the project specifically, he did say the deal is “with a Viacom property.”

The key to forging fruitful content partnerships, Silverman said, is partnering with names that won’t just serve as figureheads. He said Eminem and Rosenberg have a history with and fondness for the sneaker shop that “Detroit Rubber” is built around, and have a genuine involvement with the series.

“They’re not just putting a talent brand on a show,” Silverman said. “It’s not just about finding the talent as a brand.”

“I think as Android continues to expand and becomes integrated in platforms like the Samsung, you’re gonna see YouTube be a big beneficiary of that,” Silverman said, “and I think as you see more and more tablets phones and televisions with android operating systems, you’re going to see YouTube be where channel 2, CBS was in the birth of television.

“So that’s another reason we want to be there,” he explained.

As for Electus’ growth, Silverman says that the company is expanding cautiously.

“We want to learn from the mistakes of companies that grew too quickly, and then encountered real growing pains,” Silverman offered. “You want to build infrastructure as revenue grows and as opportunities arise you don’t want to do it just for the sake of doing it.”