Innovation is a mindset — not just something you do once or twice a week — and Hollywood’s media companies have done a pretty poor job of it, a panel of New Media experts said in the final panel at TheGrill, TheWrap’s fourth annual Media Leadership Conference on Tuesday.

“Not a lot of that culture has really rubbed off on SoCal media companies,” said Raddon, a former producer (“A Slipping Down Life”) and director of the Los Angeles Film Festival  from 2000 to 2009. “I just found a strong affinity to how people were building business up there.”

The panel, titled “Innovators panel: Meet the Folks We’ll All Be Working For in 10 Years,” also included Tumblr’sDavid Hayes and Lowercase Capital partner Matt Mazzeo. It was moderated by TheWrap’s Lucas Shaw. 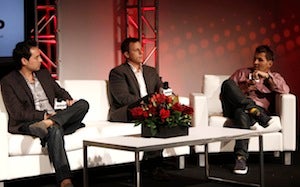 Raddon relayed the story of a major film studio that hosted a weekly “innovation group” – which was managed by, of all things, the company’s human-resources department.

(At right: Hayes, Mazzeo and Raddon)

“It’s hilarious,” he said. “Innovation is a mindset, not just a word.”

But there’s good news: A whole lot of companies who do get it are sprouting up all over town.

“This city is seeing this massive growth and explosion in tech companies,” said Mazzeo, whose Lowercase Capital advises and invests in companies at the junction of tech and media. “A lot of this is happening in mobile. It couldn’t be a more exciting time to be playing in both worlds right now.”

And there’s no bigger nexus point than YouTube — another thing the panelists don’t think Hollywood is getting its head around.

“This town has a misperception about what’s happened with YouTube, which just keeps going up and up,” said Raddon, citing its staggering growth toward 1 billion unique users per month.

The reason many traditionalists turn their nose up at YouTube, he said, is that it’s still not easy to monetize there — especially the platform’s wicked-fast growing overseas users.

“But you gotta have some vision here,” he said. “In the early days of cable, the big networks were sitting around doing the same thing … My kids know two things: They know YouTube and Neflix. They know a little about what Nickelodeon and the Disney Channel are.”

At the suggestion that emerging storytelling forms — short videos, gifs, the like — would be so disruptive as to put an end to the two-hour movie or 10-season TV show, Mazzeo bristled: “Our consumption patterns might change,” he said, “but the storytelling forms will survive. The people I deal with in tech may think, ‘Well, this is better.’ But they don’t think the other thing has to die.”

Hayes, entertainment evangelist at Tumblr and head of the blogging platform’s think-tank CANVAS, said people are simply finding different ways to use different platforms, and young people are already acclimated to those differences.

“They’re being trained at a young age to be satisfied by a three-minute video, or a three-second gif,” he said. “A lot of these platforms are being used to market story forms. We’ll soon see them be used to deliver those story forms.”