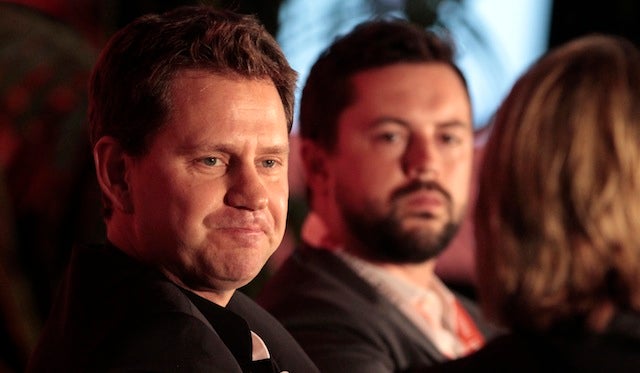 As China becomes a bigger player in the international movie business, it's opening up on the television side as well.

"The TV business has changed a lot in the last few years, and the back-room dealings don't really happen as often as they used to," Nick Lafferty, head of production for FarWest Entertainment, said Friday during the panel discussion "How to Navigate China" at TheWrap's@Locations conference in the West Hall at the Los Angeles Convention Center.

He was joined on the panel by Jon Niermann, founder and CEO of FarWest, an independent production company that delivers multi-platform content, from TV and movies to music to animation. "You hear these horror stories about how scary it is in China, and we just haven't found that to be true," Niermann (at left in photo) told panel moderator Sharon Waxman, the site's editor-in-chief.

"We've had a lot of opportunity that we otherwise would not have. The key word is 'reciprocity.' You're not gonna go in there and steal from China; you have to give something, too.

While shows come together fairly quickly, the dealmaking process is a lot slower, with Chinese officials changing terms and numbers after contracts have been signed.

"That's when the negotiations really begin," said Niermann. "Sign the contract and then start negotiating. You have to have a contract, but it's not necessarily final. There's still flexibility. It might take a little longer, but it's better to stand firm.

"With Asia, it's a matter of persistence," he said. "People have tried it before, the question is, Can you keep it going? You're not going to make money right away, so you have to have means to sponsor the show. License fees aren't much, so it's about finding the right model between sponsorship and private investment. You have to establish yourself as a company first."

"Credibility is the biggest factor," added Lafferty, who speaks five languages, including fluent Mandarin. "It wasn't until Year 5 that people really took me seriously. You have to show the Chinese people that you're not there to make a quick buck."

And it helps to have the right sponsorship. "Our Chinese partners are a private company that has been on the ground forever," Lafferty said. "They have great connections with the government and we've helped them out a lot too in getting access to formats. They're interested in learning from the West and how international deals are done," said Lafferty.

Niermann used to run Disney's TV business; he and his wife decided to move overseas after learning about an open job in Hong Kong from the head of Disney's HR department.

A year later, Disney announced a theme park for Hong Kong, and opportunities began presenting themselves. In 2007 he launched Hong Kong-based FarWest.

Lafferty got a job with NBC Olympics in 2007 straight out of college, where he studied Chinese. "After the Olympics, the economy collapsed, and I decided to stick around. It has been an adventure ever since. It's hard to figure out the market by yourself," he said. He met Niermann in 2009 and has been working with him ever since.

Niermann said his company aims "to be the bridge" between East and West: "the company you feel comfortable working with. Every studio is trying to do things in the market, but as an indie company we have the flexibility to work with different people."

Niermann and FarWest, for example, created "The Search," about a musical group called Blush, which is the first pan-Asian girl group designed to be successful in the West. "There was no public vote, Niermann said, "but we documented our search for a year and a half and sold that show, which airs in America on AXS TV."

And despite his 27-year corporate background, including president of Walt Disney International Asia, he also created and hosts a weekly night-time talk show that allows Asian celebrities to reach Western audiences.

"Our show has been great outlet for Chinese actors to reach Western audiences," he said. "We had Donnie Yen, who starred as 'Ip Man' in the 2008 Chinese film, and he can show his clips and be interviewed in English. There wasn't a platform for celebrities who come to Asia. There's no Letterman or 'Tonight Show' of Asia, so I said, 'Let's create that.' There's no way you can start up a talk show in America like this, coming from the corporate side."

Niermann and Lafferty treated TheGrill audience to a clip of the talk show, which Waxman lauded for its production quality. "It's the magic of editing," joked Lafferty, who said that sets are built in just three days.

Despite not having proper metrics, broadcast has gotten a lot better in terms of quality of the shows and numbers. China, Singapore and Malaysia offer numbers, but there's no Nielsen that exists to record a show's average. "They don't have ratings so I can make it up. We're the No. 1 talk show in Asia," joked Niermann.