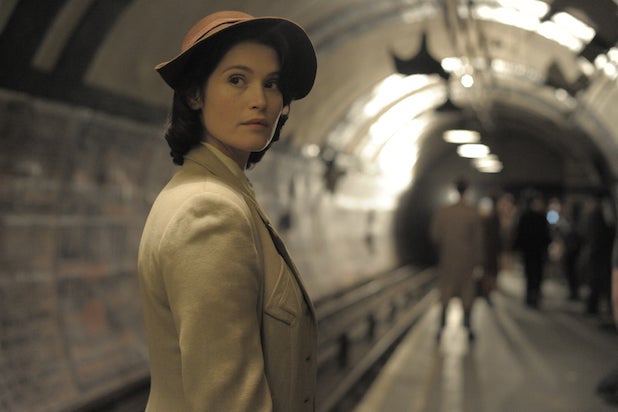 Perhaps the only standout thing about the otherwise pleasantly polished “Their Finest,” a showbiz-during-the-Blitz prestige dramedy from “An Education” director Lone Scherfig, is the crater-sized chasm between the message the film wants to impart and the way it actually goes about delivering it. Which is to say, to tell an innately feminist story about women seeking and gaining recognition for their work, Scherfig and screenwriter Gaby Chiappe interestingly make the film all about men.

It’s London, 1941: The boys are off to war, the bombs are falling overhead and Catrin Cole (Gemma Arterton) has landed a new gig at the Ministry of Information, film division. Initially hired to the punch up the “slog” — the women’s dialogue — in one-reelers and informational shorts, Catrin soon finds herself working on a full-on Technicolor war epic about the evacuation of Dunkirk for an Alexander Korda-like producer.

To do so, she is teamed up with a pair of hard-living screenwriters, one of whom is Tom Buckley (Sam Claflin), a young cynic with a heart of gold.

The film glides smoothly through its first act, counterbalancing the pompous ridiculousness of the showbiz set against the hardscrabble realities of life in war-ravaged London. Catrin and Tom base their war epic on the story of two sisters, and “Their Finest” mines the nips and tucks of the screenwriting process — shaving 10 years off the characters’ ages, sexing the story up, adding a blonde American to the mix — to fine comic effect.

As a past-his-prime actor cast in the war epic, Bill Nighy offers expert comic relief, stealing every scene he’s in. But he’s not in every scene, and for the most part the film explores the difficulties of a woman moving into a position of influence in an all-boys’ club: Buckley tells her, “Girls don’t want to be the hero — they want to have the hero.”

Though you’d think the film would be set up to disabuse the screenwriter of that belief, every choice it makes does the exact opposite. Catrin, despite being the nominal lead of the film, is only ever defined by relationship to men. (In addition to her work travails, Catrin also faces challenges in her personal life as her husband (Jack Huston) grows frustrated because she becomes the main breadwinner.) But her character never develops or grows, or shows any interest in matters beyond the two male leads.

In the first part of the film, she can only talk about the guilt she feels about not spending enough time with her struggling artist husband. Then (spoiler alert!) that relationship fizzles, and in the next scene she sets her sights on Buckley and spends the rest of the film pining over him.

For a film that explicitly tells you it’s about the importance of women in the workplace (when Catrin’s apartment building is destroyed by a German bomb, she more or less turns to the camera to say, “If I wasn’t at work, I would have been killed!”), “Their Finest” doesn’t give them that much to do.