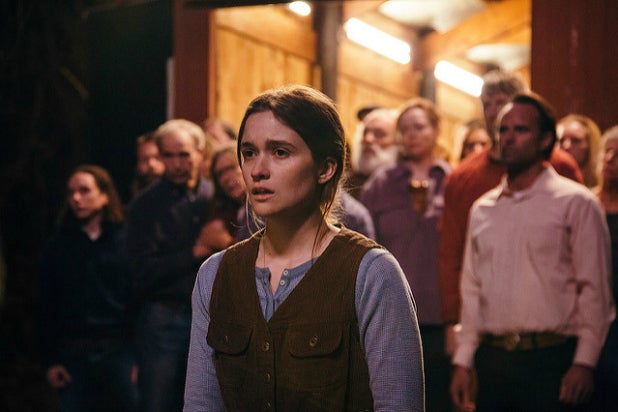 Anchored by an enviable cast that includes Oscar winner Olivia Colman, “Them That Follows” sinks its teeth into religious fanaticism in an isolated Appalachian mountain community, where an animal’s instinctual reactions are interpreted as a test of faith. This tense, slow-burning drama, which premiered at this year’s Sundance Film Festival, marks the feature debut of directors Britt Poulton and Dan Madison Savage.

Oppressively restrained, actress Alice Englert (“Beautiful Creatures”) stuns in the role of Mara, a young woman who acts as a quiet conduit for insight into the Pentecostal snake-handling church that her father runs. We meet her at a point in her life when steadfast, solid devotion has started to show cracks of doubt, as an explosive secret consumes her. Torn between Augie (Thomas Mann, “Me and Earl and the Dying Girl”) and her soon-to-be husband Garret (Lewis Pullman, “Bad Times at the El Royale”), Mara feels confused while surrounded by men and women who only deal in absolutes and certainties.

Atop the food chain in this expectedly misogynistic, patriarchal microcosm is Pastor Lemuel (an excellent Walton Goggins). Multitasking not only as spiritual leader, but also as snake catcher and charmer, the unconsciously deranged figure willingly endangers his followers during services, using the reptiles on their bodies to determine whether God or the Devil inhabits them. In spite of this, cheerleaders/lackeys Hope (Colman) and Zeke (Jim Gaffigan in a small but strong dramatic role) are so mesmerized by Lemuel’s teachings that they don’t see their son Augie is eager to change course.

Goggins leaves behind, even if momentarily, the manic characters he so often portrays and goes for a much more calibrated degree of madness and megalomania. Mann, on the other hand, is in charge of enduring the grislier bits that instill dread into “Them That Follow.” Performing as Dilly, Mara’s orphan sidekick, Kaitlyn Dever (“Beautiful Boy”) exemplifies manipulated innocence, while Pullman’s turn runs successfully on jealousy and male entitlement.

Among a cast crowded with first-rate talent, Colman reigns supreme and boosts the work of her fellow actors, playing a stern enforcer desperate to secure both her salvation and that of her only child. In a handful of scenes, she gives the movie’s most mentally punishing performance, one that ranks alongside her best work.

With no technology in sight beyond motor vehicles for most of its running time — until the use of a certain electrical tool — the film gives the impression that the location is suspended in time; this could almost deceivingly come across as a period piece, if not for small clues. A patiently paced debut, “Them That Follows” was photographed by Brett Jutkiewicz without many embellishments, exploiting the deceptive tranquility of the natural landscape, which contrasts with the turmoil at hand.

There are plot points clearly designed to be shocking which, once revealed, turn out to be underwhelming, and instead read as predictable situations or repercussions considering the environment. What’s the worst sin an unmarried woman, a pastor’s daughter no less, could commit to earn damnation in the eyes of such extremely devout believers? Or what could go wrong for a group of people that handles poisonous live creatures without any precautions or gear on a weekly basis? Logically, calamity can and will strike.

Nonetheless, the filmmakers let the story slither at its own rhythm, so that the magnitude of the psychological control can be fully exposed. To accomplish that, their superb cast guides the film through a poisonous doctrine taken not from the pages of imagination but from real American folklore.