"Twilight's" Robert Pattinson, Kristen Stewart and Taylor Lautner are about to find themselves in one of Hollywood's biggest and oldest predicaments.

What do they do for a second act? 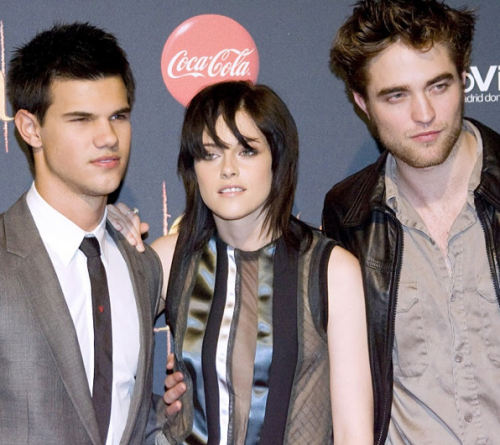 It remains to be seen if there will indeed be life after teen idol-dom for any of them.

The problem of turning a starring role in a hit franchise into a lasting career has bedeviled everyone from Sean Connery and Harrison Ford to, well, Mark Hamill.

Most recently, other than Daniel Radcliffe's nude turn in "Equus" on Broadway, even the stars of the highly successful "Harry Potter" series haven't been able to find much other work on the big screen.

"You only get a few chances in the business, so you better strike while the iron is still hot," said Jeff Bock, an analyst with Exhibitor Relations.

First out of the gate for Pattinson — who actually was plucked out of "Harry Potter" for "Twilight" — is next month's romantic drama "Remember Me," which analysts say will be key to establishing the James Dean lookalike as a certifiable box-office draw.

But his co-stars have been equally busy carving out names for themselves. 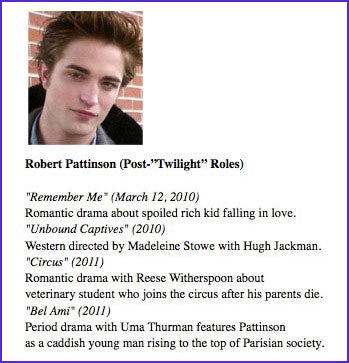 Stewart was all over Sundance last month in a pair of indie films, the Joan Jett biopic "The Runaways" and the well-received family drama "Welcome to the Rileys."

In the process, she has been building on her pre-"Twilight" predilection for smaller flms with well-established, critically lauded actors and directors, such as "Adventureland" and "Into the Wild."

She will also appear in "The Yellow Handkerchief" with William Hurt and Maria Bello; the film about a group of strangers traveling through post-Katrina Louisiana gets a limited release next week.

Lautner, on the other hand, seems to be taking the blockbuster route, lining up four action movies that he will try to fit around filming "Breaking Dawn," the possibly two-part finale to the "Twilight" saga.

Lautner, who had a bit part in the recent "Valentine's Day" rom-com, will play a college student trying to save his friends from a drug cartel in "Cancun," the lead in the spy-thriller "Abducted" and will top line the superhero movies "Max Steel" and "Stretch Armstrong."

He just dropped out of "Northern Lights," directed by "Max Payne's" John Moore and which was rumored to star Tom Cruise.

Though Pattinson is arguably the biggest of the three "Twilight" stars (at the Los Angeles premiere of "New Moon," he sparked orgiastic fits among the teen girls lining the streets that were frightening in their intensity), he seems more than willing to leave the tent-pole projects to Lautner.

"There's no point (doing an action blockbuster) — I mean, I don't have any material desires at all, I wear the same clothes every single day," the actor told Vanity Fair last November. "I don't buy anything. And I don't go out anymore either!"

Indeed, his last non-"Twilight" role was portraying a young Salvadore Dali, in the gay-themed "Little Ashes."

But despite his protestations, both "Remember Me" and the upcoming "Circus" with Reese Witherspoon cannily appeal to his target demographic — teen girls. At $20 million, "Remember" is a modestly budgeted affair that analysts think will easily make back its money and is expected to  break big. 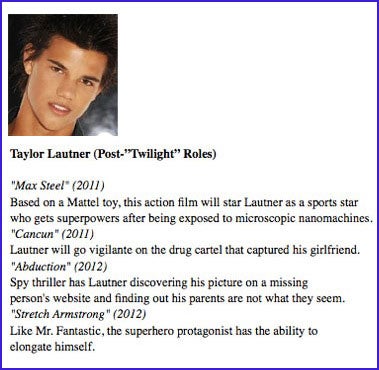 If the trailer for "Remember Me" is any indication, the romantic drama will feature plenty of Pattinson's trademarked lovelorn brooding.

For Pattinson's post-"Twilight" success, of course, it helps if the movie is a hit, and at least one box-office tracker thinks that should be the case.

"It's about double the interest levels of any of the films opening that weekend," John Singh of tracking site Flixster told TheWrap. "Its biggest audience is that under-25 female group, and we've seen with movies such as 'Twilight' and 'Dear John' that this demographic can absolutely open a movie."

"After 'Star Wars,' Harrison Ford did a movie called 'Hanover Street,' which bombed," Singh said. "Audiences didn't want him as a romantic lead — they wanted him to reprise the lovable rogue he'd played before."

Once burned, Ford regrouped, re-teamed with George Lucas on "Raiders of the Lost Ark" and created another iconic anti-hero role in a smash hit.

Indeed, analysts say many actors in the "Twilight" trio's position are tempted to try to explode their image and play the polar opposite of the roles that brought them success — a strategy that often backfires. 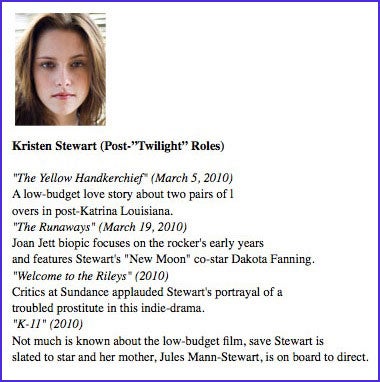 Hence Stewart's approach. She's taking on interesting roles, such as the iconic Jett and "Rileys" troubled prostitute — but they retain the flinty core that made her Bella a role model to teenage girls.

In Lautner's case, reviewers seem to have been more enthusiastic about his musculature than his acting chops. That makes the more physical roles that he's pursuing a sensible fit. They may not expand his range, but they're sure to be explosion heavy and have the potential to be major hits.

Added to that, the high-octane action films could broaden his audience beyond young girls and into the teenage boy and young male terrain.

The biggest hurdle facing the actors, though, is Father Time.

"Actors who come to success when they're younger find that their looks fade, so it pays to establish themselves as actors and not heartthrobs," said Jonathan Kuntz, a professor of film history at the University of California, Los Angeles.

Kurtz pointed to one strong role model for the "Twilight" stars: Leonardo DiCaprio, who went from the object of teen girls' affection in "Titanic" to the hardened star in a series of intense Martin Scorsese dramas such as "The Departed" and "Shutter Island."

In the process, he's attracted older male fans and greater critical attention that have sustained him even as his youthful good looks have begun to wane.