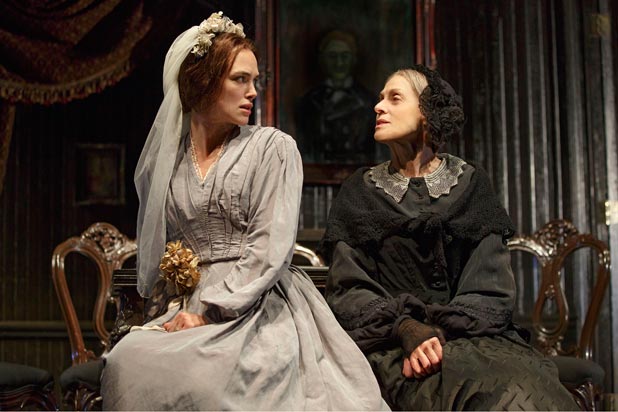 Two seasons ago, the Roundabout Theatre Company presented a mesmerizing revival of Sophie Treadwell’s “Machinal.” Under the direction of Lyndsey Turner, this 1928 play dove right into the heart of repression to show why a young woman murdered her husband.

On Thursday, the Roundabout opened its production of Helen Edmundson’s new stage adaptation of “Therese Raquin” at Studio 54. It’s also mesmerizing, but not in a good way.

Emile Zola published the novel “Therese Raquin” in 1867, and the similarities between his story and Treadwell’s, which was based on a real-life case, are remarkable. Both classics center on stifled lead female characters who embark on affairs with men who are hot, very hot, before they murder their insufferable husbands.

The “Machinal” revival was blessed with an astounding physical production; Es Devlin’s turntable set became a metaphor for the vortex of the woman’s madness. The revival also featured Rebecca Hall, in her Broadway debut, who knew how to hold our attention with her utter stillness.

In her own Broadway debut, Keira Knightley plays the title character, and she also has been directed (by Evan Cabnet) to be utterly still, at least for most of the first act. Edmundson gives Therese very little to say in the beginning.

Knightley stands off to the side, away from the other actors while they babble about the kind of petty bourgeois things that make you want to take murder into your own hands before Therese does. 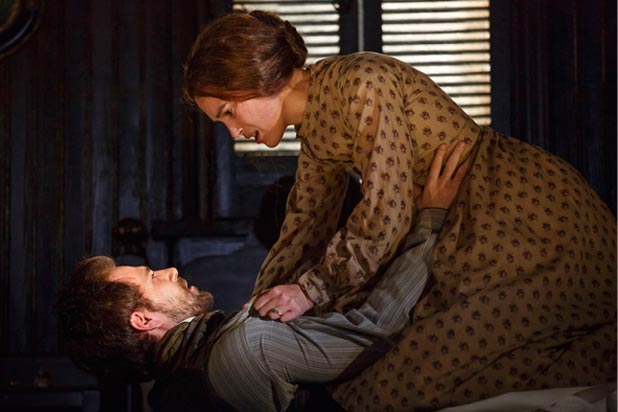 In case we might miss Knightley, there’s a spotlight on her face. She stares and stares, and finally when one of the other actors delivers the kind of line that would Danielle Steel pause, Knightley actually moves! She moves her eyes. It could be dramatic. In practice, the effect is risible.

When Knightley is able to inject humor into a performance, as she does in “The Imitation Game,” the results are marvelous. When she’s wholly dramatic, as in “Anna Karenina” or this “Therese Raquin,” she’s monotonous.

The larger problem is that Edmundson and Cabnet haven’t decided whether “Therese Raquin” is a great tragedy or some Grand Guignol potboiler. Beowulf Boritt’s set design also keeps switching gears, and in this big production there are a lot of gears to switch. The show opens with an Olympic-size pool of water on stage (spoiler alert: Gabriel Ebert’s Camille Raquin drowns) and little else. The water and bareness represent Therese’s quest for freedom; they also act to swallow up the actors’ voices by creating an acoustic vacuum.

Later in the play, a finely detailed living room and adjacent bedroom drops down from the Studio 54 flies. For the first couple of drops, it’s impressive. However, this immense set goes up and down so many times that you begin to fear the actors will end up as stage kill.

And in another dazzling display of overproduction, Therese and her lover (Matt Ryan) meet in a garret that is suspended on wires over the water. Knightley, who moves so little in the beginning, really kicks up a storm when she and the boyfriend go at it. The only problem is the garret begins to sway as they screw.

Not everything goes wrong. Ryan, the show’s major piece of eye candy, is appropriately studly and manages to produce few laughs despite being stuck with some of Edmundson’s clunkiest lines. Judith Light as Therese’s mother-in-law makes the character’s tiresomeness almost bearable. But even she can’t escape Edmundson and Cabnet’s need to go over the top. In the second act, when Therese has been sexually unleashed (and then goes nuts), it’s now Mom’s turn to fall silent due to a stroke. Sitting in a wheelchair, Light tries to signal who killed Monsieur Raquin. It wouldn’t take much tweaking to turn this bit into a classic moment on “SNL.”