The man who famously declared himself King of the World on Oscar night 10 years ago has now become the ruler of an entire planet.

Directing his first feature since "Titanic," James Cameron appears to have gone in a similarly epic direction with "Avatar," a technologically audacious 3D sci-fi production that was previewed for audiences on IMAX screens around the country on Friday — a day he dubbed "Avatar Day." 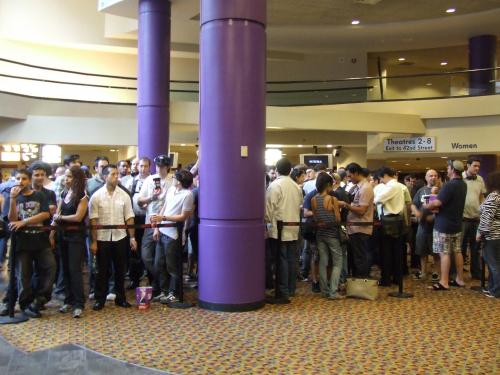 Attendees eagerly reserved their free tickets for the 15-minute preview well in advance, crashing the site on multiple occasions. Nevertheless, two of the four screenings that took place at the AMC Empire in Times Square Friday evening contained dozens of empty seats, an absence that Fox representatives blamed on the rainy weather.

For such a highly ambitions marketing scheme, there seemed to be a fair amount of confusion among casual moviegoers.

One group thought they were going to see the entire movie. "Well," concluded a member of the crowd, "we could go see the new Tarantino instead." (AMC offered $9 discounted tickets to attendees interested in watching something else after the presentation, and they could also purchase tickets to midnight screenings of "Avatar" for its Dec. 18 release date.)

A family seated near me mistakenly thought this was a big-screen adaptation of "Avatar: The Last Airbender," Nickelodeon’s animated series currently being turned into a live action feature by M. Night Shyamalan. 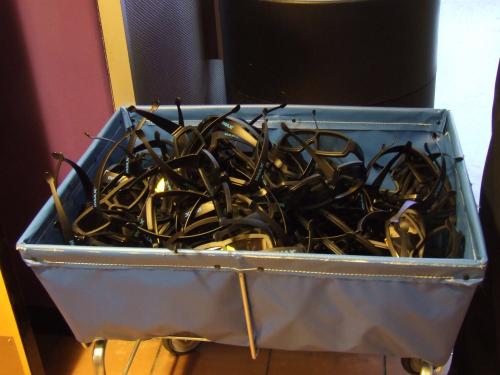 "That was nothing like the cartoon!" lamented a confused adolescent.

Nevertheless, it would appear that Cameron’s interstellar adventure does qualify as a cartoon — albeit an adult one.

"Avatar" takes place in the 22nd century, when paralyzed soldier Jake (Sam Worthington) agrees to a complex military experiment that implants his conciousness in the body of a Na’avi, the large humanoid alien species whose planet serves as the movie’s principle battleground.
These sparkly blue characters tower over people and dart about with whip-fast tails in tow. When Jake becomes embedded in their culture (unknowingly participating in a military invasion scheme), he forms a partnership with Neyitri (Zoe Saldana), a female Na’avi equipped with the primal toughness necessary to survive on the planet’s cutthroat jungle environment.
The four scenes included in the preview mainly consisted of Jake running, dodging and shooting on the colorful alien planet, which looks unquestionably fake but nevertheless contains an engagingly multitextured patchwork of advanced color schemes and expressive imagery.
In its faster moments, "Avatar" resembles the cutscenes of a videogame — which, unfortunately, means that its supposedly "historic" 3D achievements only add a mild sensory flourish to the kind of spectacle that 21st century audiences got used to a long time ago.

The first scene in the preview shows Jake in a wheelchair listening to a military sergeant explain the dangers of the Na’avi’s home planet, Pandora. "You’re not in Kansas anymore," he barks.

In the next scene, a smarmy scientist (Sigourney Weaver) helps Jake into a coffin-like apparatus that transfers his mind into the avatar. He awakes in the body the large blue creature and immediately begins wreacking havoc in the lab, giddy over his newfound strength.
Cameron avoids the obvious 3D gimmick of making things pop out of the screen, but the added depth doesn’t add anything profound, new or objectively "cool" to the scene. In fact, it made me feel unreasonably dizzy.

Still, that was nothing compared to the scenes that came next, which I can best descibe as deep space "Apocalypto."

The Na’avi are a tribal species (with African accents to boot) invaded by ill-intentioned human explorers, suggesting a glorified version of the metaphor currently in theaters with "District 9," although Cameron obviously wants his allegory to achieve a greater thematic depth through his ultra-complicated plot.

Jake and Neyitri zip through the jungle, battling a stegosauraus-like monstrosity and then fleeing its more powerful pack leader. The action, while fast, seems familiar, although the 3D filter does appear to intensify sudden movements.

In subsequent scenes, Jake struggles with other strange beasts and domesticates a massive flying creature. This establishes an engaging sequence in which he soars off a cliff and penetrates the air.
There’s little reason to assume that "Avatar" won’t deliver a number of visceral thrills in a similar fashion, but that alone does not make it historic. Given that Cameron has hyped up his 3D approach as a momentous achievement on par with Technicolor, I was surprised to find that it felt relatively basic.
Jerky motions still yield that annoying "ghosting" effect that other 3D technologies often cause, while objects that show up in soft focus but close to the screen (such as plants poking out near the edges of the frame) have a strangely blocky texture. Don’t expect audiences — regardless of what the industry does with Cameron’s technology — to walk away with a unique sense of dazzlement on par with the resonance of the then-spectacular CGI in 1993’s "Jurassic Park" (it holds up pretty well today).

Nevertheless, Cameron’s experiment with the ever-evolving art of buzz deserves recognition for its innovative approach.

"As fans," Cameron said in a video introduction, "I know you’ve been waiting for an ‘Avatar’ trailer." Instead, he gave them something different that achieved the same essential goal.
"I liked it," an attendee said on the way out, "but I don’t know if I’d see it in 2D."
If Avatar Day mainly succeeds at creating a dependency on its high-falutin 3D conceits, then Cameron should consider his mission accomplished.
x
Looks like you're enjoying reading