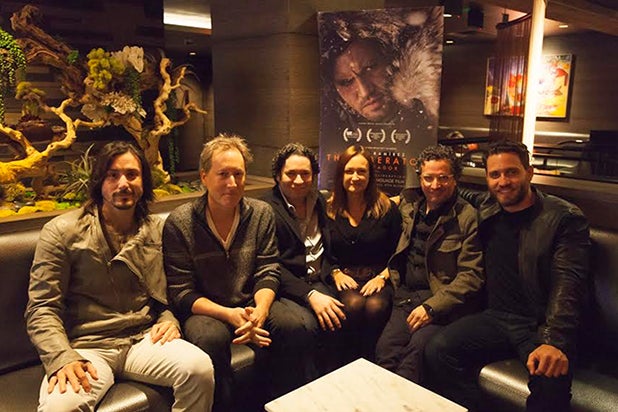 “The Liberator” is a $50 million Spanish-Venezuelan war epic about Simon Bolivar’s quest to free Gran Colombia from Spanish rule and unite the South American continent. But titular star Edgar Ramirez is more focused on exploring the “man behind the legend.”

“I grew up in Venezuela surrounded by the iconography of Simon Bolivar. He was a person for whom I always felt a deep admiration,” he told Steve Pond, TheWrap‘s Awards Editor, at a question and answer session after an Awards Season Screening Series presentation of his film at iPic Theater in Los Angeles on Wednesday. “It was easy for me to empathize intellectually with his cause, but as an actor you need to empathize emotionally.”

Ramirez previously earned an Emmy nomination for playing a nuanced villain in “Carlos,” an IFC Films miniseries about  legendary Venezuelan terrorist Carlos the Jackal. He adds an equal dose of depth to the renowned patriot he plays in “The Liberator.”

Bolivar gives his fair share of rousing speeches, of course, and even charges courageously into the battle front several times, but the portrait the film paints of South America’s most famous freedom fighter also shines a light on the man’s flaws.

“From the beginning I was trying to find the man behind the myth,” said Arvelo. “I have to say what I found was a huge amount of loneliness [surrounding] this classic romantic character.”

Bolivar is also written as a stubborn idealist who loses as often as he wins. But screenwriter Timothy J. Sexton (“Children of Men”) insists that’s what makes the story compelling.

“From a storytelling point of view, what was interesting was not his victories, but his defeats,” he said. “What we did was structure the whole film around his failures.”

The Osca- nominated screenwriter also revealed the film’s original title was “The Seven Deaths of Simon Bolivar,” but producer Ana Loehnert said it sounded too defeatist. Filmmakers eventually settled on the current title, which she said sounds powerful.

Much of  the film’s cast and crew hails from Venezuela, where (along with Spain) much of the film was also shot. But not Sexton, which is part of why he was so appealing to director Alberto Arvelo.

“Talking Simon Bolivar [for Venezuelans] in some ways like talking about George Washington for Americans,” said Arvelo. “That’s why we decided from the beginning that we needed a writer who wasn’t from Venezuela. We wanted a universal point of view.”

But whereas Washington is a heavily scrutinized historical figure, of whom there are many detailed and verified accounts, Bolivar is not.

“Writing [the script] I was dealing with a dead character who is somehow very much alive in the culture. Everyone still has their own version of Bolivar,” explained Sexton.

In addition to director, writer, stars and producers, the film’s composer Gustavo Dudamel joined the Q&A panel. Dudamel is a world renowned Venezuelan conductor and violinist, but brand new to scoring films. He shared his heartwarming story of how he got the job, which earned him a round of applause from the iPic audience.

“As a composer, honestly I don’t have any experience,” he said to the panel. “When my wife was pregnant and we were waiting for the baby, I canceled like two months of concerts around the world… I was reading the script and I started to play some music… Alberto, who is my son’s godfather, was around and I called him one night.”

“I said ‘Look, it has to start like this. You need to tell the person who writes the music it must be nostalgic and heroic at the same time,'” he continued. “Then I played for him some things and he said ‘You will be the composer of this film’s music.'”