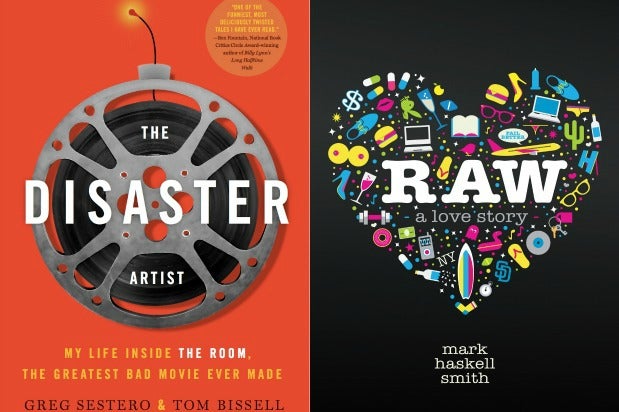 Like “The Wizard of Oz”? Politics? Six-packed reality stars having sex with repressed intellectuals? They’re all in the magical world of books this holiday season.

Books are those bound collections of pages people keep telling you to “read.” Did you know some of those shows and films you like are inspired by these stacked pieces of paper? It’s true. And for the last few years you’ve even been able to read them on flat screens, to be closer to the TV-movie comfort zone.

Also read: Nate Silver’s Knock on ‘Double Down': ‘There’s Absolutely No Self-Awareness in the Book’ (Video)

But seriously, person who can read (that’s you!): Nothing feels better than turning pages. And very few pages demand turning this season like the ones in the books we recommend. “Double Down” has enough election-year insight to make Barack Obama shake his head. “No Place Like Oz” will make you grateful for the concept of “public domain.” And “Raw: A Love Story” will make you rethink your condescension about reality TV.

Here are some of our favorite books this holiday season.

“The Circle”
By Dave Eggers
On Facebook, users still have the right to opt out. In “The Circle,” they don’t. In his new book, Eggers pays a terrifying tribute to the social network, and other online properties that continue to push sharing and data collection. While the book isn’t subtle and its criticism of modern society can be tiresome, Eggers is a terrific writer and the overall effect is as hypnotizing, as, well, “The Social Network.” - Deirdre McCarrick

Also read: ‘The Room’ Star Greg Sestero on the Role He Never Wanted in the Greatest Bad Movie Ever Made

“The Disaster Artist”
By Greg Sestero and Tom Bissell
If you’ve been lucky enough to attend a raucous screening of “The Room” with writer/director/producer/star Tommy Wiseau, then you should appreciate co-star Sestero’s hilarious account of making the movie he never actually wanted to star in. It turns out, Wiseau makes his best impression on the page, because Sestero and co-author Bissell perfectly capture the cult filmmaker’s out-of-this-world personality. - Greg Gilman

By Mark Halperin and John Heilemann
Double check before buying “Double Down” for the political addict on your list. The odds are good he or she has already devoured it. The sequel to the equally captivating “Game Change” will provide schadenfreude for Democrats and Republicans alike as they delight in the other side’s 2012 woes. It’s all here: How close Mitt Romney’s running mate, Paul Ryan, came to running against him; how Joe Biden accelerated Obama’s embrace of same-sex marriage; how hard Rupert Murdoch pushed to get Chris Christie in the race.  HBO is developing another film version, but it can’t possibly squeeze in all the dirt in the book. - Tim Molloy

Also read: ‘Game Change’ Sequel: Who Should Play Obama, Romney and Everyone Else in ‘Double Down’ (Photos)

“The Fat Lady Sang”
By Robert Evans
Evans already authored one of the best autobiographies in Hollywood, “The Kid Stays in the Picture.” Now the producer of “Chinatown” and former Paramount executive is back with a new memoir. Evans recounts a litany of different stories, from his contentious encounters with Frank Sinatra to the stroke that almost killed him. He also pushed his publisher to offer readers a new format, “The Robert Evans Experience,” a new product on tablets that combines Evans’ two books as well as photos, letters and video recordings. Best of all, Evans, whose inimitable voice is too often imitated, narrates it. Grab your iPads, ladies and gents. - Lucas Shaw

“Gone Girl”
By Gillian Flynn
Flynn keeps you guessing as you look inside the mind of possible murderer Nick Dunne. His wife, Amy, has gone missing. As the police investigate and Amy’s family keeps asking questions, Nick crafts lie upon lie, making us wonder if he really is the killer. And if he’s not, who the heck is? Ben Affleck and “Blurred Lines” beauty Emily Ratajkowski are set to star in David Fincher’s upcoming adaptation of the novel. - Rebecca Rosenberg

“Johnny Cash: The Life”
By Robert Hilburn
Longtime pop-music critic Hilburn had unparalleled access to Cash over a period of decades, and he proves equally adept at plumbing the depths of Cash’s bottomless music and separating the man from the myths (many of which Cash himself was adept at peddling). While many others have tried to tell this story, including Cash himself with a couple of worthy autobiographies, Hilburn adds fresh and revealing details about Cash’s childhood, his rocky career and his relationship with June Carter Cash, which was far more complicated than fairy tales like the Oscar-winning movie “Walk the Line” suggest. Quite simply, it’s a monumental biography of a monumental American artist. - Steve Pond

“No Place Like Oz”
By Danielle Paige
Paige, a former “Guiding Light” writer, takes us back to Oz with three books and three digital novellas. “No Place Like Oz,” the first of the latter, proves as alluring as a yellow brick road. “I left home,” says Dorothy. “And I came back. Lickety-split, knock your heels together, and there you are.” The series, pitched as Oz with a “Kill Bill” twist, finds a new Kansas farmgirl on a mission to end a newly corrupted Dorothy’s rule over Oz. She needs to steal the Scarecrow’s brain, Tin Woodman’s heart, and the Lion’s courage. She’s also captured Tim Kring’s imagination: He’s developing a CW show from the books. - Tim Molloy

“Raw: A Love Story”
By Mark Haskell Smith
Smith examines the mutual distrust between highbrow and lowbrow in this subversively funny clash of a reality hunk-turned-author, his ghostwriter, and a repressed blogger. Literary jealousy draws them together, but the real motivator is sex. The first big twist is audacious enough you may put down the book to laugh, but it’s quietly topped by a brilliantly Buddhist solution to the question of whose reality is best. Think Don DeLillo meets “Jersey Shore.” - Tim Molloy

“Running With Monsters”
By Bob Forrest
If you’re like most of us, you’ll spend some of the holiday season around at least one relative who likes to indulge just a bit too much during this time of the year. Which means — let’s be honest — they probably indulge just a bit too much during the rest of the year. “Celebrity Rehab” alum and former Thelonious Monster frontman Bob Forrest’s memoir, which chronicles his transition from drug-addicted rocker to rehabilitation healer, might be the gift to put that party animal on the path to wellness. - Tim Kenneally

“Self-Inflicted Wounds: Heartwarming Tales of Epic Humiliation”
By Aisha Tyler
This brilliantly funny and unfiltered examination of Aisha Tyler‘s life as an eternally clumsy nerd amplifies all the wit and intelligence she brings to her podcast, CBS’ “The Talk” and FX’s “Archer.” Fearless and unapologetic, this self-deprecating memoir gives Tyler the perfect platform to explain, for instance, that although she is black, she simply cannot dance. Tyler’s takes on tweeting, gender roles, kitchen fires and footnotes are also a treat. This is a must read and a great gift. - Mekeisha Madden Toby

“A Story Lately Told”
By Anjelica Huston
Growing up the daughter of a filmmaking legend like John Huston wasn’t easy, but life with the  “The African Queen” director was far from dull. It also makes for a vivacious, dishy read by his daughter, Anjelica Huston, who became celebrated in her own right as the Oscar-winning star of “The Grifters” and “Prizzi’s Honor.” The story of her metamorphosis into one of cinema’s most striking and assertive screen presences will be told in volume two. If this first part is any indication, expect it to be a must-read. Here, Huston recounts a childhood spent in her father’s ornate country home, a failed initial foray into acting as the star of John’s medieval romance “A Walk With Love and Death” and her decision to decamp for New York City and the world of modeling. Through it all, the ghost of John Huston hovers over all. - Brent Lang

“Train”
By Tom Zoellner
“Hell on Wheels” fans will go off the rails for Zoellner’s upcoming history of trains. Zoellner is a master of building locomotive-fast narratives around massive subjects: His last book, “Uranium,” was about the active ingredient in nuclear bombs, and made Jon Stewart wonder, “What’s wrong with us?” “Train” asks the same question about modern transportation, making a passionate plea for the only mode of travel that reduces oil dependence while being damn romantic. - Tim Molloy