Greg Sestero is an actor mostly known for playing Mark in “The Room” — a midnight movie with a reputation for being so bad that it’s actually amazing. But here’s a fun fact for the movie’s faithful following: Sestero never wanted to be writer-producer-director-sole financier Tommy Wiseau’s film at all.

“I was just trying to help Tommy get the project off the ground,” Sestero told TheWrap. “And then the night before filming, through a strange set of circumstances, I ended up being in the movie.”

Those  circumstances are recounted in the entertaining first chapter of Sestero’s new book,”The Disaster Artist: My Life Inside ‘The Room,’ the Greatest Bad Movie Ever Made,” co-authored by Grantland’s Tom Bissell.

The book, from publisher Simon & Schuster, hits shelves Tuesday. As the title suggests, it explores the making of  the 2003 $6 million cult classic, which was shot for four months in a parking lot behind a Hollywood equipment rental shop and famously marketed by just one Los Angeles billboard for an astonishing four years.

In conjunction with the book’s release, Angelenos can also look forward to Sestero reuniting with the film’s cast at the New Beverly Cinema on Tuesday night for a book signing and discussion, following a screening of a behind-the-scenes documentary about “The Room.”

Sestero began his odyssey in “The Room” — a wannabe drama about a love triangle between Johnny (Wiseau, pictured at left), Mark (Sestero) and Johnny’s  fiancée Lisa (Juliette Danielle) — as the film’s line producer. Although, neither he or Wiseau actually knew what a line producer did.

“Basically, I was doing anything that needed to be done,” Sestero writes in the book. “I scheduled all auditions, meetings and rehearsals; ran the casting sessions; helped find equipment; and, most challenging, made sure Tommy didn’t sabotage his own film.”

“Disaster Artist” makes it perfectly clear, however, that the latter was an impossible task. The night before shooting, the aspiring filmmaker desperately tried to convince Sestero to replace an actor already cast in the role.

Sestero was hesitant, and for good reason. The script — devoid of any structure, consistent character motivation and logical plot development — was as puzzling as the mysterious millionaire he had met four years earlier in a San Francisco acting class, where Sestero says he was intrigued by Wiseau’s “comic-book pirate presence.”

This wasn’t the first time Wiseau had offered Sestero the part. But it was the first time he had offered the part with a fat paycheck and a brand new car, which was too much for the then struggling 24-year-old actor to turn down.

And why would he? “The Room” was just a friend’s peculiar passion project that was already so bad on the page that nobody would ever want to watch it on the screen. Right?

“I didn’t think anybody would ever see it,” Sestero told TheWrap. “Tommy was desperate that I be in the movie, so I was like, well, ‘I guess I’ll try to survive it.'”

Sestero has been surviving “The Room” for over 10 years now. While the 2003 release was initially panned by critics and only accumulated $1,800 at the box office, it still managed to find an audience that not only appreciates its nonsensical plot but grows every year.

“I’ve been to almost every major city,” Sestero said about the raucous screenings that take place all over the world, from L.A. to Jerusalem, thanks to a 2008 Entertainment Weekly article that Sestero credits for bringing the underground sensation to the attention of the general population.

Audiences typically enjoy “The Room” by mocking every second of it. When audience members aren’t shouting a plethora of  bad dialogue (“Oh, hi Mark,” “You are tearing me apart, Lisa,” and Sestero’s personal favorite, “In a few minutes, bitch!,“) at the screen, they’re throwing plastic spoons at it — a nod to the unbelievable amount of framed spoon pictures featured in the interior scenes.

The movie has attracted a legion of fans from all walks of life, including celebrity admirers such as Jonah Hill, Kristen Bell, Rob Lowe and Paul Rudd. Sestero says he has received support from “Reno 911!” creator Thomas Lennon, as well as comedian Patton Oswalt — who offered a blurb on the cover of Sestero’s book, calling it “a surprising, hilarious, and compelling account of the making of the modern ‘Plan 9 from Outer Space.'”

Despite the recognition and international appreciation for the film, though, Sestero is quick to downplay any notions that he is a celebrity. 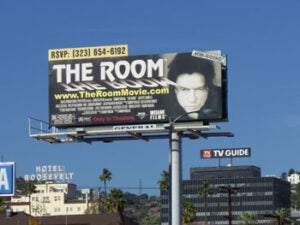 “Making a movie or being part of a project that you just see as kind of like an inside joke that no one’s ever going to see, it always feels a little bit surreal when people recognize you from that,” Sestero said. “To  me, being famous or being a celebrity, I think it’s for work you did that deserves some kind of merit.”

Still, Sestero has embraced the anomaly in independent cinema with open arms. He began touring the film with Wiseau in 2010 and took advantage of the opportunity to research his book — which certainly deserves some merit.

“The Disaster Artist” effectively captures Wiseau’s off-the-wall personality and comical misunderstanding of American culture (and just about everything else), while offering insight into the “The Room” and the personal story behind it, that only Sestero could provide.

In honor of the release, the bizarre billboard  (above) that Wiseau used to market his movie is back up right where it used to be: overlooking the west side of Highland just north of Fountain.

“I just thought it was his way of saying, ‘This movie’s not going to die, and I’m going to keep it alive as long as I can,” Sestero said, after noting that Wiseau “definitely”  has “a lot of ambition” to make a new movie.

Sestero did not specify whether Wiseau would make an appearance at the cast reunion and book signing on Tuesday, but he did ensure that he had the auteur’s blessing to write the book — even if he has some issues with it.

“He’s read excerpts of it,” Sestero said. “The one thing with Tommy is that he believes ‘The Room’ is the greatest movie ever made, and nothing really is ever going to change that, so I’m sure there are aspects of the story that he’ll have his own say on.”