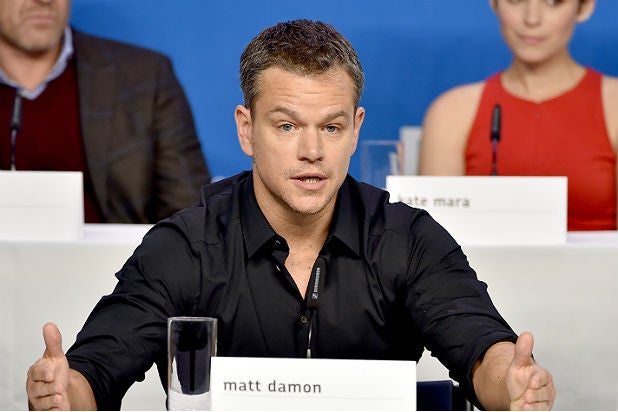 Matt Damon drew backlash for his controversial comments about diversity behind the camera on the premiere episode of HBO’s “Project Greenlight,” which aired Sept. 13. The actor later released an apology, saying: “My comments were part of a much broader conversation about diversity in Hollywood and the fundamental nature of ‘Project Greenlight’ which did not make the show.”

Everywhere I go people ask my thoughts on #Damonsplaining. I’m not talking about my mother and my high school friends. I mean complete strangers, outside of a restaurant, needing me to explain it to them.

I guess people ask me because I fit the profile. Apparently, I’m the topic du jour. Woman. Of Color. Writer. Director.

All joking aside, I’m amazed at the magnitude with which Matt’s words rattled through the industry. I was on set at 0’dark thirty pulling standard 12 hour network days the morning after “Project Greenlight’s” recent iteration aired and I swear, you could hear his name buzzing across sound stages for two straight days. Then just as the collective shock began to simmer the “sorry you were offended, happy to start a convo” arrived. Prompting another social media sh-tstorm by countless marginalized folks who have been having this convo for 100 odd years.

Last evening, I stepped away from punching up the back six of a thirteen episode deadline, for two hours to catch a Master Class at The Wallis and sure enough a student asked Denzel Washington for his thoughts on the subject. Within the occasion of having Denzel’s ear and undivided attention, a 22-year-old film student thought the most important thing in their world at that very second was to ask for help processing the impact of Matt’s words on her career.

I imagine the collective shock stems from Matt’s point A-Z history as one of the good ones. He is legendary for being a nice guy. Consummate pro. With a wicked sense of humor. Humble. Loyal. Zero scandal. No skeletons. Sincerely charitable. Proper activist.

Quite frankly, none of us fans saw it coming. 85 percent of the industry displays their lack of awareness (or lack of interest in possessing awareness) on their sleeve or in an email hack. Not Matt. The proud child of a loving Educator who, unlike his peer group has repeatedly made choices with acute awareness, intellect and interest. If a top ally is seemingly blind to the reality of the industry’s long tailed hiring practices we have to ask — where do outliers gain support?

I genuinely have no idea what he meant to say or why as a producer, he wouldn’t have full content control from frame 1-1000. Hard to step away from that apology without wondering “why he didn’t laboriously comb the bin specifically splicing in crucial footage permitting fullness to a weighted discussion with producer Effie Brown.” (The final run time on the show hitting airwaves, permitted ample space for an additional line of dialogue toward clarity).

The only thing I know for certain is — people love Matt. No if, but or maybe. (A glimpse at my Twitter feed and you’ll find a 24 month stretch of me begging for his return to the “Bourne” series. I’m embarrassed to say how many triple digit times I’ve watched “Identity” & “Supremacy.”) The ratio of our affinity for a public figure forces us to investigate an unexpected, misinterpreted and/or hidden side of their nature. Leaving us confused about which end of the playing field we now stand.

Being the generous person I am (really I’m hoping people will stop asking me to quantify the rules of diversity and the mystical origins of Damonsplaining), I’ve formulated something of a quiz. Similar to what you’d receive in a general check up. Along the lines of; do you have allergies, do you smoke, do you drink, how often, yada, yada.

Probably best if you aim to tell the truth since come on, you’d only be lying to yourself. No one on planet Earth ever has to see your answers (copy/paste to the notes app on your smart phone then delete immediately after completion).

Intended merely as a jumping off place. The point is, self awareness begins by asking tough questions.
*POC = People of Color. If you’re extra frisky, please add WOMAN & LGBTQ to each question.
It’s a free country. I don’t think there should be mandates requiring Hollywood stars must work with diverse filmmakers. I also don’t think there should be outdated ideas about who gets to bat and who doesn’t.

To quote Jimmy Kimmel, sincere apologies to Matt Damon, we ran out of time tonight.

Victoria Mahoney developed “Yelling to the Sky” through the Directors and Screenwriters Sundance Institute Labs and was named an Auerbach Screenwriting Fellow, Annenberg Film Fellow, Cinereach Fellow, Maryland Fellow, IFP Narrative Lab fellow and a Tribeca Film Fellow. She was also named one of, “25 New Faces of Independent Film” by Filmmaker Magazine, “Yelling to the Sky,” starring Zoe Kravitz, Jason Clarke, Gabourey Sidibe and Tim Blake Nelson, had its World Premiere in Competition at the 2011 Berlin Film Festival, where it was nominated for the Golden Bear, thereby anointing Mahoney as only the fourth American Woman, Writer/Director, invited to Competition in over 61 years. Mahoney is currently developing her next feature, “Chalk_Rx,” directing “The Conversation with Amanda de Cadenet” starring Gywneth Paltrow, Zoe Saldana and Chelsea Handler, and “Exhale” for Magic Johnson. Her shorts include "Wracked," “Graduation” and “Searching.”
KEEP READING..