“This Is Us” fans knew heading into Tuesday’s new episode that it would be a tough one, and the show certainly delivered on that promise.

The NBC drama’s latest installment featured Kate (Chrissy Metz) and Toby (Chris Sullivan) grieving their miscarriage in different ways, with Kate less willing to confront the pain of the situation. Ultimately, after a teary conversation with Rebecca (Mandy Moore), Kate reconnected with Toby, and the pair agreed to soon try again to conceive.

Sullivan told TheWrap that it was “important” for the show to tackle the aftermath of a miscarriage and how a couple can struggle to move forward after such trauma.

“Miscarriage happens a lot more than people are willing or able to talk about, just because it’s such a hard thing to talk about,” said Sullivan. “I was humbled and eager to have the discussion. Pregnancy is difficult enough, and for Kate, it was complicated a little more by her age and the other factors, and so it was tricky for sure.”

Sullivan, who can be seen on the YouTube talk series “Good Mythical Morning” next month, called this week’s “This Is Us” episode “somber” and “difficult” for the couple, adding that it was initially “hard for both of them to process all of these things and do it in a healthy way that keeps them moving towards each other.”

“Any solid relationship is forged in common struggle,” the “Guardians of the Galaxy 2” actor continued. “The good times are not what make a strong relationship, so as long as they keep moving toward each other instead of away, it should be beneficial for everybody involved.”

Also Read: From 'This Is Us' to 'Mom': The 6 TV Shows With More Viewers Than Last Year (Photos)

As far next week’s fall finale, Sullivan hinted that there may be another clue dropped about Jack’s (Milo Ventimiglia) death. And he also teased an open-ended conclusion to the episode that may keep viewers scratching their heads heading into the show’s winter hiatus.

“We wouldn’t leave you on a holiday break without a cliffhanger,” Sullivan vowed.

“This Is Us” airs Tuesdays at 9/8c on NBC. Sullivan joins co-hosts Rhett & Link on YouTube’s “Good Mythical Morning” on Dec. 5. 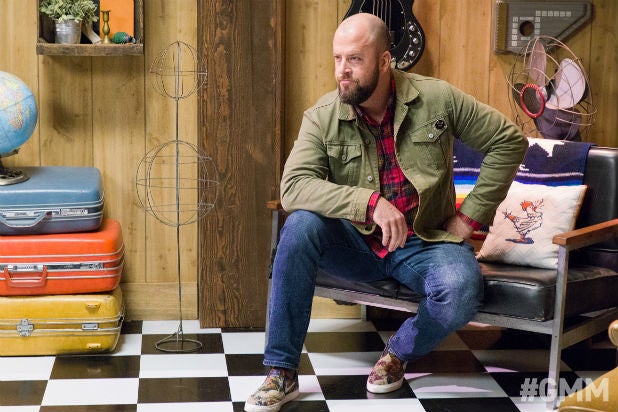 Chris Sullivan on the set for the Dec. 5 episode of “Good Mythical Morning”