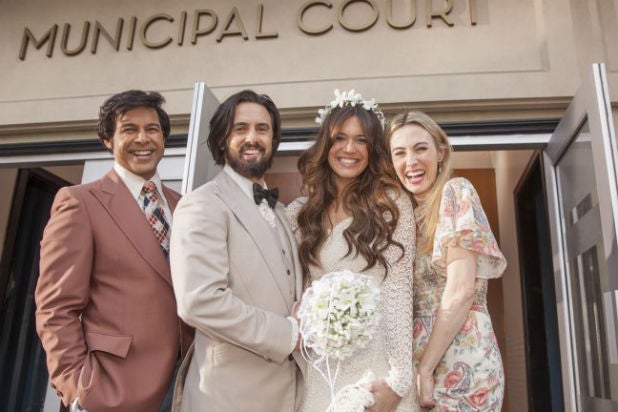 (Warning: This story contains spoilers for Tuesday’s “This Is Us“)

“This Is Us” is giving more detail about how Rebecca (Mandy Moore) ended up married to Miguel (Jon Huertas), the former best friend of her late husband, Jack (Milo Ventimiglia).

Tuesday’s episode of the hit NBC drama series included flashbacks to 2008, as Randall (Sterling K. Brown) and Beth (Susan Kelechi Watson) prepared for the arrival of their first child.

Also Read: 'This Is Us' Cuts Kevin Spacey Reference From Tonight's Episode

After Beth gives birth to Tess, Rebecca posts a photo to Facebook of her first grandchild, leading Miguel to respond with a congratulatory message. In it, he asks how Rebecca has been “for the past eight years,” suggesting that Jack may have died in 2000.

“This Is Us” executive producers John Requa and Glenn Ficarra told TheWrap that creator Dan Fogelman and the show’s other writers are aware that fans have trouble rooting for Miguel, given his relationship with Rebecca, but that viewers may eventually change their minds about him.

Also Read: 'This Is Us' Directors Open Up About Latest Jack Shocker: It 'Explains a Lot'

“Miguel is treated very unfairly because he’s put up against Jack who we know very well and is wonderful and everything,” Requa said. “If there’s one thing I know about Dan and the writing staff, you’re going to frickin’ love Miguel when it’s all said and done. Because Rebecca wouldn’t just settle — you know there’s a good reason.”

Ficarra concurs, making it clear that Miguel does not do anything untoward, despite some viewers’ suspicions that Miguel may have had eyes for Rebecca while Jack was still in the picture.

“[Fans’ dislike of Miguel] doesn’t speak so much on Miguel as it speaks on how much everybody likes Jack,” Ficarra added. “He’s not like a mustache-twirling villain. He’s a great guy — [but] he’s not Jack.”

Moore previously told TheWrap that she is approaching the relationship between her character and Miguel with the assumption that no infidelity took place.

“I’m playing it as there was certainly nothing nefarious going on: They didn’t get together while Jack was alive, and there was no cheating,” Moore said. “None of that. No one stole anyone.”

“I never imagined that they were going to go in this way,” Susan Kelechi Watson tells TheWrap

If you were worried that the recent clues on "This Is Us" might prove to be red herrings in the mystery of Jack's death, fear not. Susan Kelechi Watson, who plays Beth on the hit NBC drama, told TheWrap that she thinks fans may actually find more satisfaction in the upcoming scenes that focus on the life of the character played by Milo Ventimiglia, rather than specifics about the cause of death. "One of the things that I find the most interesting about this season is who Jack is and the totality of his experiences," Watson said. "In the last episode, we see Jack come off of a helicopter, and we see Jack in the military. I feel like Jack's background is going to become increasingly more interesting."

Watson discussed the closing scene from last week's Season 2 premiere, which hinted that a fire in the family's home played a role in the beloved patriarch's demise. "Yes, we're going to find out how Jack died, and the house burning down is huge -- that's obviously the gateway into how it all happened," the actress continued. "But I can almost guarantee it's going to be even more interesting to learn about Jack's life and what's behind his drinking and what's behind how he conducts himself as a man."

Watson (pictured above) called the storyline "sad" and said it "felt so unfair" to her that Jack's life comes to such a premature end. She also pointed out that the upcoming twists for Jack are not at all what she had been expecting. "I never imagined that they were going to go in this way," she said of the show's writing staff. "That blew me away as well because I thought, 'Wow, we don't know Jack.' We really don't know everything that there is to know about Jack. We are just peeling back the layers of all of these characters." The "Louie" alum also teased what's next for Beth and husband Randall (Sterling K. Brown) as they move forward with adopting a 12 -year-old girl from a difficult upbringing. "We are going to go forward and try, and it's not something that either of us obviously have any experience with, but we are choosing to honor William [Ron Cephas Jones] in this way, and now it seems that we're both finally on the same page about it," Watson said. "We never thought about an older and troubled kid, someone who people wouldn't think about normally adopting. We're going to see how they manage that." "This Is Us" airs Tuesdays at 9/8c on NBC.