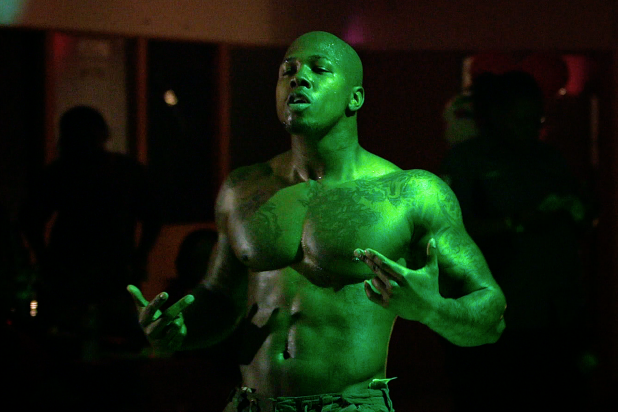 The best description of director Gene Graham’s (“The Godfather of Disco”) stripper documentary, “This One’s for the Ladies,” comes from one of the film’s subjects, naughty dancer enthusiast Michele Moore, who says, in an exasperated tone, “It’s a lot.”

That’s an understatement because she’s referring to gyrating men who lay their penises on her head, twerk in her face, and grind up on the stage in front of an adoring crowd. It’s excessive, over-the-top, and somewhat uncomfortable, and yet she absolutely loves it. That kind of oxymoronic fascination prevalent among many fans is what Graham aims to explore in a film that winds up increasingly hallow and frustrating to watch.

There are times when “This One’s for the Ladies” looks like it was shot by a random peeper with an old cameraphone, taping the goings on at a lascivious nightclub from a vacant corner in the room, capturing the action on the stage and among the screaming audience throwing down dollar bills. It’s not compelling to watch, and it certainly has no real dramatic effect. It just is what it is — the POV of a casual fan surveying a scene.

But then there are other, even emptier moments, when Graham focuses on the intimate lives of the individual strippers and their fans in an attempt to highlight weightier truths, like dancing twins Raw Dawg and Tyga reflecting on growing up with a drug-addicted mom and admirer C-Pudding organizing her church choir and protesting in a Black Lives Matter march. Though the dichotomy is somewhat interesting, the images are so poorly highlighted by both Graham and cinematographer Paul Rowley (“Abasezi: The Nightdancers”) that they don’t draw viewers into their worlds as much as they turn them away.

That’s mostly because “This One’s for the Ladies” is so tonally all over the place. It goes from the candid strip-club confessions of C-Pudding and fellow fan Poundcake — whose experiences they apparently think are so scandalous that they have to make up aliases — as they fry a huge pan of fried chicken for a church function, to twin devotees Double Trouble’s enthusiastic reflections on their club escapades, and lesbian stripper Blaze’s remarks about navigating the gender and sexuality politics of the industry as she shows off her “Matrix” moves in front of Graham.

The filmmaker’s attempts to normalize and legitimize the stripper industry by showing the “real life people” behind it only manage to alienate and, in some cases, fetishize them. For instance, both sets of twins featured often complete each other’s sentences like a performance routine. It begs the question of who’s the target audience of the film — millennials growing up in today’s progressive, more sex-positive climate already recognize exotic dancers as workers like the rest of us who shouldn’t be shaded or shamed. And as for their fans, strip clubs are a multimillion-dollar industry because they are obviously very popular. So being a regular visitor is far from unseemly.

It also makes conversations with dancers Fever and Mr. Capable, and even Raw Dawg and Tyga — qualifying why they strip by explaining that they need to put food on the table in a socioeconomic landscape that is set up for black men like them to fail — really out of touch in today’s world. There’s also an equally odd scene where Moore, the only white fan interviewed and the only one who divulges her real name in the film, explains that her dad “gave up” on expecting her to bring a white man home because she prefers the black strip clubs. The latter is just another example of the film’s lack of cohesion because Graham neither follows up on Moore’s racial context nor explains why she forgoes an alias.

It’s hard to tell decipher Graham’s intent in a film that raises a lot of different topics without making any definitive statements. Maybe “This One’s for the Ladies” is not even for millennial audiences, but rather for older black women, like most of the fans interviewed (with the exception of Double Trouble), whose churchgoing communities in Baltimore and New Jersey would clutch their pearls at some of the stories revealed. If so, that makes the movie myopic almost to the point of amusement.

There is certainly something to be said about the way older, body-positive black women have been portrayed as lacking sexual desire on screen. But because most of the film is shot like a grungy home video with abysmal lighting, it doesn’t really celebrate these women as much as it supports the archaic belief that they should repress their libidos and keep them hidden behind a thick veil of anonymity as they snicker among themselves in their kitchens.

Because Graham fills “This One’s for the Ladies” with so many different dialogues that don’t always connect, he prevents it from offering concise, sociopolitical insight about race, class, and sexuality. As a result, the film comes off as pedestrian and ultimately has nothing really essential to say.