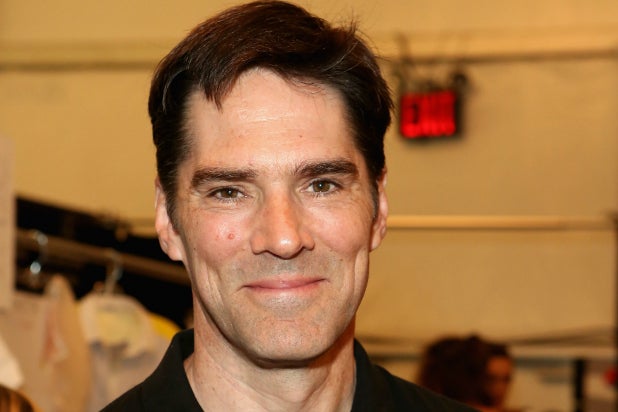 A month after Thomas Gibson was dismissed from “Criminal Minds” because he kicked a writer in the leg, the actor detailed the incident, stating that his “foot came up and tapped him on the leg.”

“We were shooting a scene late one night when I went to Virgil [Williams] and told him there was a line that I thought contradicted an earlier line,” Gibson told People. “He said, ‘Sorry, it’s necessary, and I absolutely have to have it.’ “

According to Gibson, he returned to set and shared the response with some of his fellow cast members when the writer came into the room.

“He came into that room and started coming towards me. As he brushed past me, my foot came up and tapped him on the leg,” Gibson said. “If I hadn’t moved, he would have run into me. We had some choice words, for which I apologized the next day, and that was it. It was over. We shot the scene, I went home — and I never got to go back.”

Gibson was let go from the ABC Studios-produced procedural after kicking a writer in the leg during a disagreement. He had previously been suspended for two weeks. The CBS series’ lead had appeared on 255 episodes of the popular procedural.

“Thomas Gibson has been dismissed from ‘Criminal Minds,'” CBS Television Studios and production company ABC Studios jointly told TheWrap after the incident. “Creative details for how the character’s exit will be addressed in the show will be announced at a later date.”

After the incident, Gibson initially said he kicked the staffer in retaliation after he became “aggressive.”

“There were creative differences on the set and a disagreement,” the actor told TheWrap in a statement back in August. “I regret that it occurred. We all want to work together as a team to make the best show possible. We always have and always will.”

Now, the 54-year-old actor added, “I feel like it took years to make a good reputation and a minute to damage it.”

Gibson will appear in the first two episodes of Season 12, which will debut Sept. 28 on CBS.