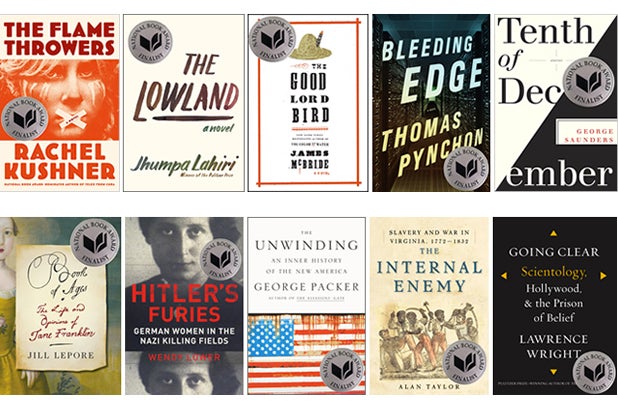 The National Book Awards finalists were announced on Wednesday, with five each in the categories of Fiction, Nonfiction, Poetry and Young People’s Literature.

Lawrence Wright’s “Going Clear: Scientology, Hollywood, & the Prison of Belief” made the nonfiction list. The book stemmed from Wright’s “New Yorker” piece on “Crash” director Paul Haggis and his exit from the controversial church.

He’ll be competing against a fellow “New Yorker” staff writer in the category: Jill Lepore’s “Book of Ages: The Life and Opinions of Jane Franklin” also made the list.

Thomas Pynchon’s “Bleeding Edge” is a finalist in the fiction category — he won the award back in 1974 for “Gravity’s Rainbow.” His fellow finalists include Pulitzer Prize winner Jhumpa Lahiri, for “The Lowland.” and MacArthur “Genius Grant” recipient George Saunders, for “Tenth of December.”

The winners will be announced at the award ceremony on Nov. 20.

Jill Lepore, “Book of Ages: The Life and Opinions of Jane Franklin”

George Packer, “The Unwinding: An Inner History of the New America”

Cynthia Kadohata, “The Thing About Luck”