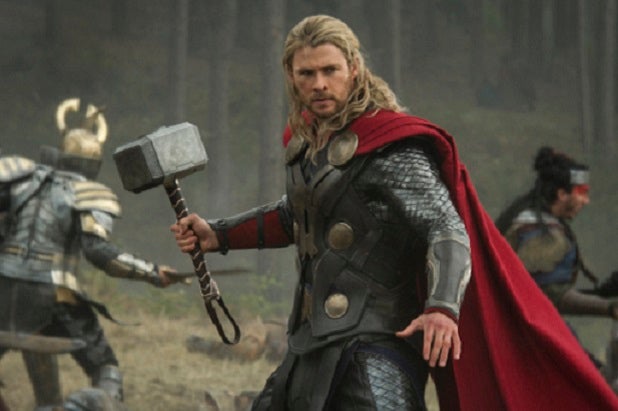 Disney’s “Thor: The Dark World” powered to $109 million in its first three days at the overseas box office, and the early returns from the Marvel superhero sequel are running well ahead of the original film as it rolls in 36 foreign markets this weekend ahead of its U.S. opening Friday.

The massive opening lifted the studio’s overall overseas grosses to $2.31 billion for the year, marking the fourth consecutive year that Disney has surpassed the $2 billion benchmark overseas.  The previous record was $2.302 billion, set in 2010.

And it knocked Warner Bros.’ “Gravity” out of the top spot it had held at the foreign box office for the past month. The Sandra Bullock-George Clooney space epic added another $27 million from 55 markets to up its international total to $207 million and its worldwide haul to $426.7 million after five weeks.

The original “Thor” took in $450 million worldwide in 2011, with nearly 60 percent of that coming from abroad. “The Dark World” is expected to do even better, owing largely to the effect of Disney’s 2012 blockbuster “The Avengers.”  The Marvel superhero mash-up gave a huge boost to “Iron Man 3″ earlier this year and will likely do the same for “The Dark World.”

Joining Chris Hemsworth in “Dark World” are Tom Hiddleston, who reprises his role as the bad brother Loki, the villain from the “Avengers,” and Natalie Portman, who returns as the Norse god’s  love Jane Foster. Alan Taylor, whose credits include TV’s “Game of Thrones,” directs. He’s also been tapped to helm the upcoming “Terminator” reboot for Universal.

Elsewhere, Paramount’s “Jackass Presents: Bad Grandpa” upped its international total to $17.6 million — better than the foreign totals of “Jackass the Movie” and “Jackass No. 2” — in its second week abroad. It brought in $6 million from 19 markets.