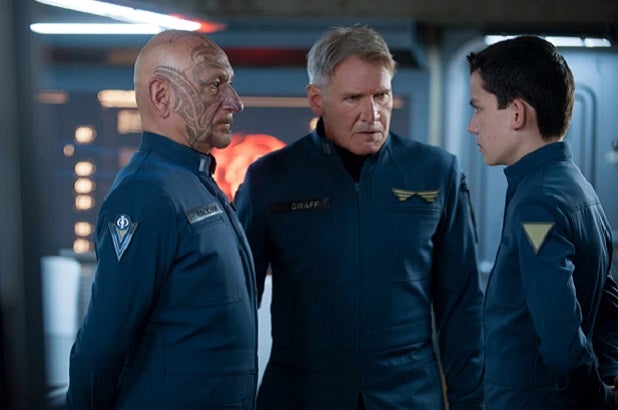 The futuristic sci-fi movie “Ender’s Game” rocketed past “Jackass Presents: Bad Grandpa” and captured the No. 1 spot at the box office this weekend with an estimated $28 million haul.

The thriller based on Orson Scott Card’s 1985 novel topped two other wide openers, the animated turkey tale “Free Birds” and the old guys-gone-wild comedy “Last Vegas, both of which wound up just over 16 million for the three days.

Paramount’s R-rated “Bad Grandpa,” which stars Johnny Knoxville as sleazy codger Irving Ziskin in a series of hidden-camera pranks, was off just 39 percent in its second week and took in $20.5 million. The $15 million MTV Films production has brought in more than $62 million in two weeks.

Summit Entertainment’s parent Lionsgate is the company behind the blockbusters “Twilight” and “The Hunger Games,” and “Ender’s Game” was seen as having the potential to launch a young adult franchise.  It has a  built-in base from Card’s books – “Ender’s Game” has climbed back atop the best-seller list – and a plot featuring a young genius trained to be the fiercest warrior on an Earth threatened by aliens.

But it didn’t break out, coming in just above where analysts projected it would. The opening is much stronger than “Beautiful Creatures,” “The Host” and “Mortal Instruments: City of Bones,” films that tried and failed to connect with the Bella-and-Katniss tween crowd earlier this year. But a sequel seems a long shot for backers Summit, Odd Lot Entertainment and Digital Domain, which created the futurist world in which the $100 million film is set.

The PG-13 rated “Ender’s Game” played mainly male (58 percent) and older than might be expected, with 54 percent of the audience over 25 years of age. Moviegoers gave it a “B+” CinemaScore.

There’s no way of knowing how many people stayed away, but the effect of an online “Skip Ender’s Game” campaign” seemed negligible. Organized by a group called Geeks Out that is protesting Card’s anti-gay marriage comments,  the online petition attracted more than 11,000 signatures.

The opening for CBS Films’ “Last Vegas” was better than expected, and the PG-13-comedy starring Michael Douglas, Robert De Niro, Morgan Freeman and Kevin Kline scored a bulls-eye with it target audience, which was mature moviegoers.

Eighty-three percent of its audience was over the age of 25 and 53 percent were women, and they gave it an “A-” CinemaScore. That, and a significant 39% attendance jump from Friday to Saturday, are indicators of positive word of mouth that makes a strong run over the next few weeks seem likely.

The studio is hoping the $28 million comedy will provide counter-programming as young-skewing “Thor: The Dark World” opens Friday and “The Hunger Games: Catching Fire” lands two weeks after that.

“Free Birds,” featuring the the voices of Owen Wilson and Woody Harrelson, is the first full-length animated feature for Reel FX and Relativity Media, which co-produced and financed to the tune of $55 million.

It came in a little under analysts’ projections, which weren’t that high to begin with. But the turkey tale received an “A-” CinemaScore and will have the animated market to itself until Nov. 27, when Disney debuts “Frozen.”

Holdover Oscar hopefuls “Gravity” and “Captain Phillips” continued to play strongly. Warner Bros.’ space epic took in $13 million for the three days and has a domestic total of nearly $220 million in its fifth week. Sony’s Tom Hanks piracy saga brought in roughly $8.2 million and upped its domestic total to $82 million in its fourth week.

Fox Searchlight expanded awards front-runner “12 Years a Slave,” which cracked the top ten last week, into 44 additional markets and  upped the theater count to 410. It rang up $4.6 million for an impressive $11,200 per-screen average.

“Cloudy With a Chance of Meatballs 2,” “The Counselor” and “Carrie” rounded out the top ten.