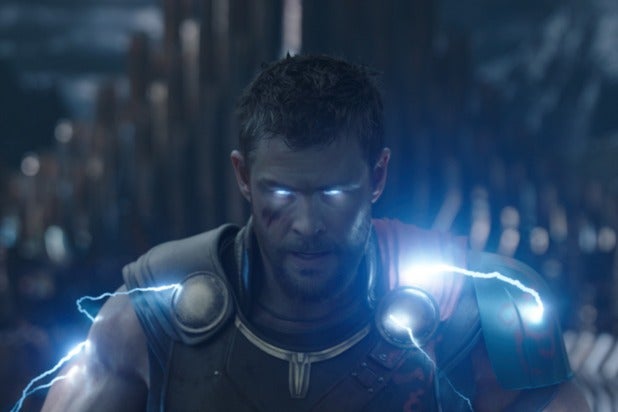 (Major spoilers ahead for “Thor: Ragnarok,” so if you haven’t seen it yet you’ll probably want to steer clear.)

So here we are, after “Thor: Ragnarok” and “Black Panther” and no more Marvel Cinematic Universe movies between us and the biggest theatrical superhero teamup ever in this May’s “Avenger’s Infinity War.” With “Thor: Ragnarok” getting its digital home video release this week, it felt like the right time to revisit the mid-credits scene from that film, which leads directly into “Infinity War” and Thor meeting up with the Guardians of the Galaxy.

The third “Thor” flick features a whole bunch of moving and shaking, with Asgard being destroy and the Tesseract once again being in Loki’s (Tom Hiddleston) possession — though he seems to finally be a good guy, so maybe that’s not too worrisome.

Or it would be less worrisome were it not for what happened in the mid-credits scene at the end of the movie. The Asgardian survivors, including Thor (Chris Hemsworth), Loki, Valkyrie (Tessa Thompson) and Heimdall (Idris Elba) along with the human Bruce Banner (Mark Ruffalo), are on a spaceship headed for Earth, but their journey is interrupted by an unknown ship.

The scene does not make it clear whose ship that is or what’s going on, but Marvel Studios producer Kevin Feige gave TheWrap the lowdown. And it’s a doozy.

Also Read: 'Black Panther': Did We See the Soul Stone in Wakanda?

“We call it the Sanctuary II,” Feige told TheWrap.

For those who aren’t immediately familiar with that ship name, you’ll probably be quite alarmed to learn that’s the name of the flagship of Thanos (Josh Brolin), the MCU’s big bad who will finally take center stage in “Infinity War” after operating on the fringes of the story for most of these movies.

We have previously seen the original Sanctuary a couple times before — it’s the weird cosmic planet where Thanos sat on his throne in the first “Avengers” film as well as the first “Guardians of the Galaxy.”

Sanctuary II, being a space ship, is more mobile than some celestial body like Sanctuary, and it would make sense to find it on the move as we approach “Infinity War.” It’s not, at least in comics lore, a superweapon.

Also Read: 'Black Panther': Did We See the Soul Stone in Wakanda?

Beyond being the massive flagship of his fleet, anyway. Thanos’ real weapon is his Infinity Gauntlet, which when combined with all the Infinity Stones would give him god-like powers over space and time.

But Sanctuary II’s apparent interdiction of the last living Asgardians remains hugely impactful for setting the stage for “Avengers: Infinity War,” which when it kicks off will, apparently, find Thor in Thanos’ possession, at least for a moment (it’s likely, as is tradition for the stingers, that this scene is actually in “Infinity War”).

We do know, however, that Thor will escape somehow — in the “Infinity War” trailer we see him encountering the Guardians of the galaxy and greeting them with a “who the hell are you guys?”

So that’s where we are. Now to spend the next three months pondering how this will play out.