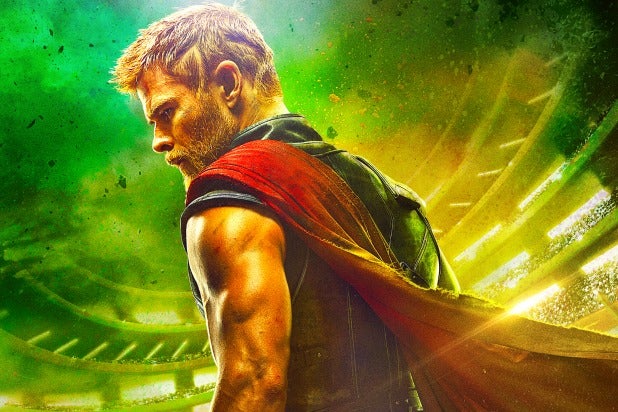 Disney crossed the $5 billion mark at the worldwide box office on Thursday, as “Thor: Ragnarok” is expected to cross the $800 million global mark on the same day.

“Thor” has now pushed Disney into the top spot on the global charts, once held by Universal, which is on the cusp of the $5-billion milestone itself with $4.97 billion worldwide ($1.6 billion domestic). Universal has one more film on its 2017 slate, “Pitch Perfect 3,” which will be released Dec. 22.

When it comes to domestic totals stateside (and Canada), Disney is currently ranked No. 2 with $1.75 billion, second to the $1.96 billion made by Warner Bros. so far this year. Disney made a record $2.4 billion domestically last year. While it may not reach last year’s domestic heights, the studio should finish the year on top after the release of “Star Wars: The Last Jedi,” which is expected to gross at least $500 million domestically by year’s end. The film’s 2015 predecessor, “The Force Awakens,” grossed $651 million by New Year’s Eve.

Disney’s global success is also thanks to its remake of “Beauty and the Beast,” the highest grossing film of the year with $1.26 billion, and “Guardians of the Galaxy Vol. 2,” which grossed $863 million worldwide. Disney’s annual totals also got a boost from its late 2016 releases, “Moana” and “Rogue One,” which combined to gross $561 million in 2017.

By the end of the year, Disney is expected to account for half of the top ten highest grossing films of the year. In addition to “Beauty and the Beast” and its two Marvel releases, Disney also has “Pirates of the Caribbean: Dead Men Tell No Tales,” which disappointed domestically with $172.6 million but was a massive hit in China and other foreign markets, giving it a $794.8 million global total. Then there’s “Star Wars: The Last Jedi,” which is expected to quickly cross the $1 billion mark when it is released in two weeks.

Also bringing in money for Disney is “Coco,” which opened to $71 million over Thanksgiving weekend and currently has a running global total of $179 million. The Pixar film has received rave reviews and is expected to be a popular pick for moviegoers during the holiday season, even with “Star Wars” in theaters.