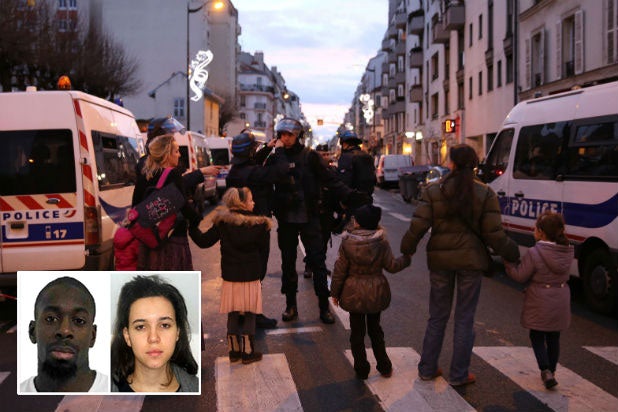 Three hostages held by the now-deceased man tied to the Charlie Hebdo attackers were killed, police told the Associated Press.

The third suspect — who shot and killed a female police officer on Thursday in Montrouge (a southern suburb of Paris) a day after three men carried out the attack on satirical newspaper Charlie Hebo — took several civilians hostage in a kosher grocery store before being killed by police.

During the shootout, three hostages were killed in the crossfire.

Hayat Boumeddiene, a woman believed to have aided Thursday’s Montrouge cop killer, is still at large.

On Friday, French President Francois Hollande spoke to the nation following the suspects and the hostages’ deaths.

“France faced up to this,” the president said. “First of all, I express all my solidarity to the families of the victims of the wounded, but France faced up to it, because when she overcomes a hardship, a tragedy for the nation, and this is an obligation for us to face up to it.”

U.S. President Obama made a statement shortly after the French President.

“I want the people of France to know the United States stands with you today, stands with you tomorrow; our thoughts and prayers are with the families that have been directly impacted; we grieve with you, we fight alongside you,” said Obama.

“The moment that the outrageous attack took place we directed all of our law enforcement and counter-intelligence operations to provide whatever support that our ally needs in confronting this challenge,” he continued. “The French government continues to face the threat of terrorism and has to remain vigilant, the situation is fluid, President Hollande made it clear they’re going to do whatever is neccesarry to protect their people.”

As TheWrap previously reported, authorities killed Said Kouachi, 34, and Cherif Kouachi, 32, on Friday, the two brothers believed to be responsible for gunning down 12 people during an assault on the offices of the French satirical magazine Charlie Hebdo, according to CNN and the Mayor of Dammartin-en-Goele in France. A hostage they were holding was freed, according to the Mayor.

The brothers’ killings came after hours of tense standoffs between elite French counter-terror forces and the suspects. They reportedly told forces they wanted to “die as martyrs.” According to multiple reports, the two suspects were in the U.S. database of known or suspected international terrorists, known as TIDE, and also had been on the no-fly list for years. It is also believed that one of the brothers recently spent time in Yemen associating with Al-Qaeda in that country.

On Wednesday morning, 12 people were killed and 11 more were wounded during the attack on Charlie Hebdo’s Parisian headquarters. Among the victims who died in the terrorist attack were acclaimed French cartoonist Jean Cabut, editorial director Stéphane Charbonnier, and two police officers. Cartoonists Georges Wolinski and Bernard Verlag were also discovered among the dead, and later psychiatrist Elsa Cayat was identified. The newspaper housed some of France’s most acclaimed cartoonists.

Paris then went on high alert and a manhunt was soon underway.