In the first trailer for “Tick, Tick…Boom!,” “Rent” creator Jonathan Larson, played by Andrew Garfield, hears a ticking noise in his head that makes him feel like he’s about to burst. And watching the newly released trailer — the first look at Lin-Manuel Miranda’s directorial debut — you sense the movie’s about to blow up in a big way, too.

“Tick, Tick…Boom!” is the film adaptation of the late Larson’s autobiographical play, which he wrote at the same time he was crafting “Rent,” the iconic production that would rock the musical theater world. Larson never got the chance to see it live, however; he passed away at age 35 on the morning of “Rent’s” first off-Broadway preview show.

“Tick, Tick…Boom!” peeks into Larson’s mindset during the eight days in 1990 leading up to the workshop of his unproduced musical “Superbia” and his 30th birthday. It poses the question of how we make the most of the time we have and captures the pressure of being a struggling artist who dreams of doing something great. 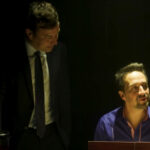 “Lately I’ve been hearing this sound. Like a time bomb,” Garfield says as Larson in the trailer. “The fuse has been lit. The clock counts down the seconds. The flame gets closer and closer and closer until all at once, everything explodes.”

Steven Levenson, a Tony winner himself, wrote the screenplay for “Tick, Tick…Boom!” based on Larson’s play. The film is the feature directorial debut of Miranda, who performed in an off-Broadway production of the play in 2014, shortly before he debuted “Hamilton.”

“’Tick, Tick…BOOM!’ is a corner of the world I know from every angle. I know what it’s like to be a struggling songwriter,” Miranda said in a statement. “I know what it is to be in your 20s writing that one musical, what it’s like to be in New York with a bunch of friends with artistic dreams and then watch them drop off one by one, to real life, while you’re still hanging on. It’s a story of doubling down on your craft in the face of impossible odds, which is not unique to musical theater — it’s the struggle of any artist trying to make a living doing the thing they love.”

Miranda is also a producer on the movie, alongside Brian Grazer and Ron Howard for Imagine Entertainment and Julie Oh, who saw Miranda on stage for “Tick, Tick…Boom!” and earned the blessing of Larson’s estate to help make the film.

The movie has been in the works since 2017 and will finally debut on Netflix later this fall, just as Miranda is back in the spotlight again for the screen adaptation of “In the Heights.” The film will also play in select theaters.

See the first “Tick, Tick…Boom!” trailer here and above, and check out a poster for the film below.