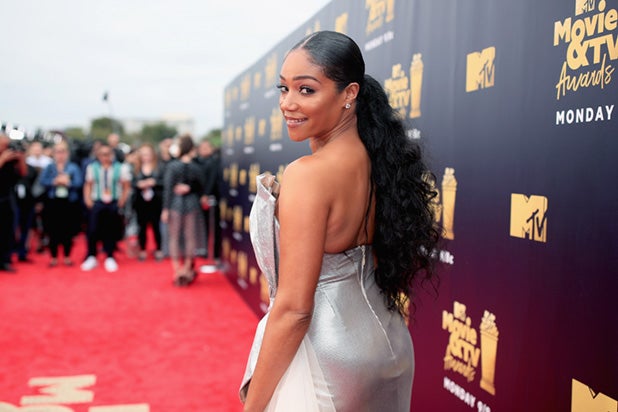 Tiffany Haddish became the first black woman to host the MTV Movie and TV Awards on Monday, kicking off her gig with a riff on another one of last year’s breakout stars, Cardi B.

The “Girls Trip” star opened the show with an impressive parody of Cardi’s hit single “Bodak Yellow,” spitting lyrics about her “money movies” and “rented shoes.” For the performance, Haddish borrowed Cardi’s look from her recent “Saturday Night Live” performance, including quaffed updo, ruffled Christian Siriano gown, and — after a gag about Michael B. Jordan’s sex appeal being enough to impregnate women solely through eye contact — a faux baby bump to match.

Haddish also followed on decades of awards show tradition, delivering a brash monologue razzing the stars and nominees in the room. From Kris Jenner to Chris Pratt, few attendees made it out unscathed — or, as was the case for the men in the room, un-admired.

Here are some of Haddish’s memorable zingers:

“It’s been a year of firsts for black people. I’m the first black woman to host the MTV Movie & TV Awards. ‘Black Panther’ is the first African-American movie to make a billion dollars. And ‘A Quiet Place’ is the first film to scare black people out of talking in theaters.”

“I’m always excited to see the Kardashians. That family is like the ‘Star Wars’ franchise. They make a ton of money, a new one’s always popping up, and they’re ruled by a bossy overlord who sleeps in a mask and loves black men.”

“You know who else I love? Zendaya. She taught me how to model, and I taught her how to grapefruit. What? She’s 21 now, she’s a grown woman. You gotta know how to do that if you want a husband.”

“Seth Rogen is here. I like to Seth, you’re my favorite bearded white man since Abraham Lincoln.”

“Look at those kids from ‘Stranger Things.’ Everyone thinks they’re so cute, but hear me out. They’re always riding bikes in a group, Eleven beats asses, and they always dropping bodies. Where I come from, that’s a straight-up gang. You never see it, but I bet that curly-haired one got a shank in his hair right now.”

“I’m glad this show covers both TV and movies because now I get to flirt with Chris Pratt from ‘Parks and Recreation’ … and Chris Pratt from ‘Guardians of the Galaxy.’ Hey, Chris, I got a galaxy you can guard.”

“Alright, I gotta wrap this up because usually when a black girl talks this much on MTV, she just got catfished.”