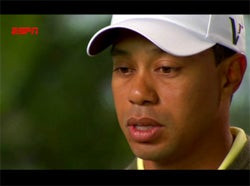 Tiger Woods gave two interviews to the press on Sunday: one to ESPN, the other to the Golf Channel. And none to Oprah.

They were the first Tiger’s granted since his November 27 one-car accident and ensuing sex scandal sent him into hiding last fall.

(I was among those who speculated Winfrey would get the first crack at Tiger’s attempt to rehabilitate his image; instead, it was Tom Rinaldi.)

And like Tiger’s press conference last month, they were controlled (both from his home in Windermere, Florida)  and purposely short (both networks got just five minutes with the golfer).

According to both networks, there were no restrictions on questions — just time. (For my money, best question was from Rinaldi: "When you look at it now, why did you get married?")

Below, the ESPN interview in its entirety, a link to the Golf Channel’s, and transcripts from both.

What’s the difference between the man who left Augusta national a year ago and the one who is about to return?

Rinaldi: For a lot of people, the spark of those bad things is Nov. 27. Early that day, what happened?

Woods: Well, it’s all in the police report. Beyond that, everything’s between Elin and myself and that’s private.

Rinaldi: Why did you lose control of the car?

Woods: As I said … that’s between Elin and myself.

Rinaldi: If it’s a private matter, why issue a public apology?

Woods: Well, I owe a lot of people an apology. I hurt a lot of people. Not just my wife. My friends, my colleagues, the public, kids who looked up to me. There were a lot of people that thought I was a different person and my actions were not according to that. That’s why I had to apologize. I was so sorry for what I had done.

Rinaldi: You’ve said you’ve made transgressions. How would you, in your own words, describe the depth of your infidelity?

Woods: Well, just one is, is enough. And obviously that wasn’t the case, and I’ve made my mistakes. And as I’ve said, I’ve hurt so many people, and so many people I have to make an amends to, and that’s living a life of amends.

Rinaldi: You said you were in treatment. The simple question is, for what?

Woods: I saw a person that I never thought I would ever become.

Rinaldi: Who was that?

Rinaldi: Why not seek treatment before all of this came out?

Woods: Stripping away denial, rationalization. You strip all that away and you find the truth.

Rinaldi: How do you reconcile your behavior with your view of marriage?

Woods: That’s living a life of amends and that’s just working at it each and every day.

Rinaldi: Given all that’s happened, what’s your measure of success at Augusta?

Woods: Well, playing is one thing. I’m excited to get back and play. I’m excited to get to see the guys again. I really miss a lot of my friends out there. I miss competing. But still, I still have a lot more treatment to do, and just because I’m playing, doesn’t mean I’m gonna stop going to treatment.

Rinaldi: What reception are you expecting from fans?

Rinaldi: How much do you care?

Woods: It would be nice to hear a couple claps here and there. But also hope they clap for birdies, too.

Rinaldi: Eleven months ago, here at Isleworth, I asked you, ‘How well does the world know you?’ What’s your answer to that now?

Woods: A lot better now. I was living a life of a lie. I really was. And I was doing a lot of things, like I said, that hurt a lot of people. And stripping away denial and rationalization you start coming to the truth of who you really are and that can be very ugly. But then again, when you face it and you start conquering it and you start living up to it. The strength that I feel now, I’ve never felt that type of strength.

Rinaldi: In the last four months, Tiger, what’s been the low point?

Woods: I’ve had a lot of low points. Just when I didn’t think it could get any lower, it got lower.

Woods: When I was in treatment, out of treatment, before I went in, there were so many different low points. People I had to talk and face like my wife, like my mom.

Woods: They both have been brutal. They’ve both been very tough. Because I hurt them the most. Those are the two people in my life who I’m closest to and to say the things that I’ve done, truthfully to them, is … honestly … was … very painful.

Rinaldi: What was your wife’s reaction when you sat down and had that first conversation?

Woods: She was hurt, she was hurt. Very hurt. Shocked. Angry. And, you know, she had every right to be and I’m as disappointed as everyone else in my own behavior because I can’t believe I actually did that to the people I loved.

Rinaldi: I ask this question respectfully, but of course at a distance from your family life. When you look at it now, why did you get married?

Woods: Why? Because I loved her. I loved Elin with everything I have. And that’s something that makes me feel even worse, that I did this to someone I loved that much.

Rinaldi: How do you reconcile what you’ve done with that love?

Woods: We work at it.

Tilghman: Tiger, you’ve been a master of control your entire life, how did things get so out of control?

Woods: Going against your core values, losing sight of it. I quit meditating, I quit being a Buddhist, and my life changed upside down. I felt entitled, which I had never felt before. Consequently, I hurt so many people by my own reckless attitude and behavior.

Tilghman: Were there moments you thought you should stop, but didn’t?

Woods: Yeah, I tried to stop and I couldn’t stop. It was just, it was horrific.

Tilghman: For a man who’s so disciplined physically and psychologically, why couldn’t you say no?

Woods: I don’t know, now I know. It’s part of what I learned in treatment, being there for 45 days you learn a lot. You strip away the denial, the rationalization and you come to the truth and the truth is very painful at times and to stare at yourself and look at the person you’ve become…you become disgusted.

Tilghman: The Masters is a demanding stage on its own, let alone for a return of this magnitude, how do you know you’re mentally prepared for this?

Woods: I’m excited to get back and play. I miss the game. I miss playing, I miss competing. I wasn’t ready to play in Tavistock or play in Bay Hill, I expressed that to Joe [Lewis, Tavistock Group chairman] as well as Arnold [Palmer]. I want to play in these events but I just wasn’t ready. I started too late with my preparation. Hank and I are starting to work now and start to get it going.

Tilghman: How do you know you’ll be ready for the Masters?

Woods: I’m starting to get my feel back. I know how to play the golf course and that helps a lot. I just got to play it.

Tilghman: How will your therapy affect your 2010 schedule? I’m assuming you’ll have more in-patient therapy ahead.

Woods: Yeah, I will have more treatment, more therapy sessions. As far as my schedule going forward, I don’t know what I’m going to do, Kelly. Last year I didn’t know because of my knee; it was still uncertain, and this year, with all the things that I’ve done I don’t know what I’ll be doing either. That to me is a little bit bothersome, too, in a sense that I don’t like not knowing what to do, but what I know I have to do is become a better person and that begins with going to more treatment.

Tilghman: You went from becoming recognized as the greatest golfer in the world to becoming a punch line. How did that make you feel?

Tilghman: America was concerned when the world’s greatest golfer was lying on the ground with no shoes at 2:30 in the morning, bleeding, what happened that night?

Woods: It’s all in the police report, they investigated it and they have it on public record; there’s a lot of stuff between Elin and I that will remain private and that’s about it.

Tilghman: How did you crash the car?

Woods: I wasn’t going very fast, but unfortunately, I hit a few things.

Tilghman: It’s been reported that members of your team, your inner circle were involved in your misdoings, is it true?

Woods: That is not true; it was all me. I’m the one who did it, I’m the one who acted the way I acted, no one knew what was going on. I’m sure if more people would have known in my inner circle they would’ve, they would’ve stopped it … or tried to put a stop to it, but I kept it all to myself.

Tilghman: What is the state of your marriage with Elin right now?

Woods: We’re working on it and it’s a process that will remain private between her and I.

Tilghman: If your father were here today and looked back on these last four months, what would he say to you?

Woods: He’d be very disappointed in me. We’d have numerous long talks. That’s one of the things I miss, I miss his guidance, wish I could have had his guidance through all this to have him help straighten me up. I know he would’ve done it.

Tilghman: What do you think he would say?

Woods: Can’t say it on air but he would’ve been very direct. Basically said, you need to get your life headed in the right direction again.

Tilghman: For the 12-year-olds and the parents out there who looked at you as a role model, what do you have to say to them to make them believe in you again?

Tilghman: How will you explain this to your children, one day when they’re old enough to understand?

Woods: I will have that sit-down talk and it won’t be just one time, I know that. It will be numerous times and I take full ownership of it, I did it. No one else did; it was just me and that’s a responsibility that I will have. I will talk to my kids, for however long they want to talk about it. That is a conversation that will need to be had.

Tilghman: Based on all that has transpired, what do you want your legacy to be when all is said and done?

Woods: Just like I wanted before. I felt that golf was a vehicle for me to help a lot of people. My dad had always said something that I never really quite understood until these times. In order to help other people, you first have to learn how to help yourself. Going into a treatment center for 45 days, I learned a lot. I learned how to help myself and that’s the way I can help others down the road.

Tilghman: I noticed you’re wearing a bracelet, can we see it?

Tilghman: What does it mean?

Woods: It’s Buddhist, it’s for protection and strength and I certainly need that.

Tilghman: When did you start wearing it?

Woods: Before I went into treatment.

Tilghman: Will you be wearing it during the Masters?

Tilghman: For the rest of your life?