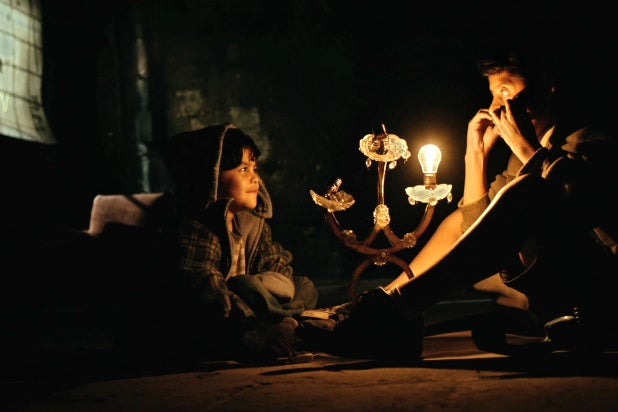 In the imaginative worlds of director Guillermo del Toro, fantasy can be a tool to understand the cruelty of our reality. The scary creatures in his movies are not always the villains. Instead, they’re the people among us, capable of horrors grave enough to create ghosts and monsters out of their victims. Recently, the generous director has taken up championing the work of one of his fellow countrymen, Issa López, whose latest film “Tigers Are Not Afraid” charmed del Toro and audiences across the festival circuit with its enchanting tale of loss, violence, fantasy, grief, and yes, tigers.

In López’s film, 10-year-old Estrella (Paola Lara) lives in a world full of uncertainty and fear. One day, a gang shooting disrupts her class, and her teacher pushes three pieces of chalk into her hand, telling her to take these three wishes. Classes are canceled and her life is about to take a dark turn.

Estrella sees the body of one of the victims on her way home, and thin lines of his blood ominously follow her home. She opens the door to an empty apartment; her mother is nowhere to be found. Now orphaned and terrified, Estrella joins a group of lost boys, other orphans from the area’s satanic narco violence, and discovers a deeper meaning to the fairytale she heard about fearless tigers and the unpredictable power of wishes.

“Tigers Are Not Afraid” quickly immerses its viewers into this fantastic world without over explaining things or declawing its sense of mystery. The audience is just as in the dark about these terrible events as the little girl. The pieces of the narrative come together as she struggles to find her mom and to survive the violence. A number of painful realities are woven into this make-believe story, like the increasing number of kids and families affected by the ongoing violence in Mexico and the corruption of government officials by wealthy narcos. This tiger’s got teeth, and it isn’t afraid to bare them to make the audience think.

There is a tragic sweetness to López’s film, much like that of del Toro’s “The Devil’s Backbone” and “Pan’s Labyrinth.” In these stories, supernatural forces intercede in a child’s life during an oppressive time. While del Toro puts his characters into historical conflicts, López is right at home spinning a modern-day fairytale that directly addresses the cost of daily violence.

There’s no distracting the audience with a costume drama. López wants her audience to think of the real terror making daily headlines, overflowing morgues and vanishing loved ones from their communities. There’s a little “Crimson Peak” in the mix as well, as it becomes apparent that Estrella should worry not about the scary-looking ghosts she sees but about the flesh-and-blood evil chasing after her and her friends, and the wishes that always end with dire consequences.

First-timer Lara brings a surprising amount of vulnerability and resilience to her character: Her dynamic with the closed-off and angry leader of the orphans, El Shine (Juan Ramón López), depicts the contrast between two different styles of grieving. For most of the movie, the little boy is angry at the satanic narcos for what they did to his mother and seeks revenge. Estrella is just as devastated as Shine but originally wants no part in seeking revenge. Like the wishes she keeps in her pocket, those narcos also come with unintended consequences.

It’s fitting that cinematographer Juan Jose Saravia cloaks “Tigers Are Not Afraid” under a dark and moody pall. The colors of this world look drained, almost every surface dingy. The kids spend most of their time in abandoned buildings or grungy waste sites which, like the children themselves, have been abandoned by society. Yet, these derelict places make perfect canvases for surreal and magical realist moments. There are cast-off toys assembled by different parts, a building with a makeshift koi pond, and joyous moments of playtime in-between the sorrow and the scares.

They’re still just kids, after all they’ve been through. The movie also makes use of animated graffiti to explain the fairytale of the tiger, echoing its author’s childlike playfulness. The film also utilizes sound in very clever ways, both as a tool for suspense and to charm its audience, as it does with an animated tiger doll that lets out a housecat’s purr. When not under the spell of nightfall and roaming spirits, the movie also features a hip soundtrack that’s rather danceable for a horror movie.

Fantasy helps Estrella see the evil in the world and what it’s taken from her. It is both a cautionary tale and a source of comfort, like the story of the tiger, which she repeats to make herself feel brave. Those stories are what she has to remember her mother by, and it’s one of the few valuables that violence cannot take from her. If she holds on to those stories, they may help her survive the villains in front of her and those still to come.

Once the spell of “Tigers Are Not Afraid” ends and the credits roll, its story lingers in the air. It’s a story of sadness, loss and survival, a fairy tale tailor-made for our anxious times.