Cook’s executive compensation had not recognized stock awards the past few years. His big windfall was tied to his 10-year anniversary as Apple’s CEO and for hitting certain performance requirements. 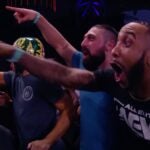 It’s been a good week for Cook. On Monday, Apple became the first company in the world to reach a market cap of $3 trillion.

The largely symbolic milestone reflects investor confidence in the stock and its ability to continue to grow. Apple has tripled its valuation in less than four years. Apple reached $1 trillion in valuation in August 2018, and doubled that two years later in August 2020.

Apple’s closest competitor in terms of market share is Microsoft at around $2.5 trillion. Google is just under $2 trillion while Amazon has a valuation of $1.75 trillion.

Apple is coming off a fiscal 2021 in which it won seven Emmy Awards, including three for “Ted Lasso.” It released new versions of its iPhone, MacBook Pro, AirPods and Apple Watch.

CFO Luca Maestri, COO Jeff Williams and general counsel and secretary Kate Adams each brought in just under $27 million in pay during the fiscal 2021 year.