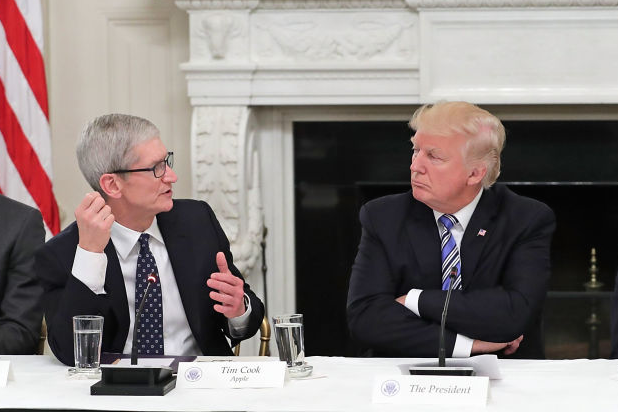 Move over, Mark Zuckerberg. You’re not the only tech bigwig who can look like he’s gearing up to run for office.

With Apple on the verge of releasing its new iPhone, CEO Tim Cook was profiled in the New York Times and asked if he has his sights set on more than running the world’s first trillion-dollar company. The paper specifically asked about a run for office — a question he didn’t completely deny.

“I have a full-time job,” Cook told Andrew Ross Sorkin. “I appreciate the compliment — if it is a compliment.”

Also Read: Netflix in September: What's Coming and What to Watch Before It's Gone (Photos)

It’s easy to see why Sorkin would ask the question. Cook has been on the move lately, announcing a new data center that will be built in Iowa (although it comes with a cushy $208 million tax break). Prior to that, he was visiting a company in Ohio that helps make Apple’s iPhones waterproof. And with the NYT on hand, he was in Texas to announce an Apple-inspired curriculum that will be featured at 30 community colleges across the country.

Cook’s goal is for the coding classes to help spur a new, diverse generation of tech workers.

“You want it to increase the diversity of people that are in there, both racial diversity, gender diversity, but also geographic diversity,” said Cook. “Right now, the benefits of tech are too lopsided to certain states.”

At the same time, he’s been an outspoken critic of President Donald Trump. Cook lambasted the president’s response to the “Unite the Right” rally in Charlottesville, Virginia and criticized the president’s military transgender ban.

“I disagree with the president and others who believe that there is a moral equivalence between white supremacists and Nazis, and those who oppose them by standing up for human rights,” said Cook in a memo to Apple workers following Charlottesville. “Equating the two runs counter to our ideals as Americans.”

Cook even waxed nostalgic about the sheer amount of legislation Lyndon B. Johnson passed as commander-in-chief, after stopping by the LBJ Presidential Library. The 56-year-old executive then lamented the seemingly glacial pace of the current U.S. government.

Also Read: Snapchat Is Cooler Than Facebook, According to Tweens at Least

“The reality is that government, for a long period of time, has for whatever set of reasons become less functional and isn’t working at the speed that it once was,” said Cook.  “And so it does fall, I think, not just on business but on all other areas of society to step up.”

Coupled with his non-denial of a run for office, Cook’s comments and actions certainly lend themselves to political speculation. But for the time being, if he walks like a politician and talks like a politician, he’s simply the chief executive of the biggest company on earth.