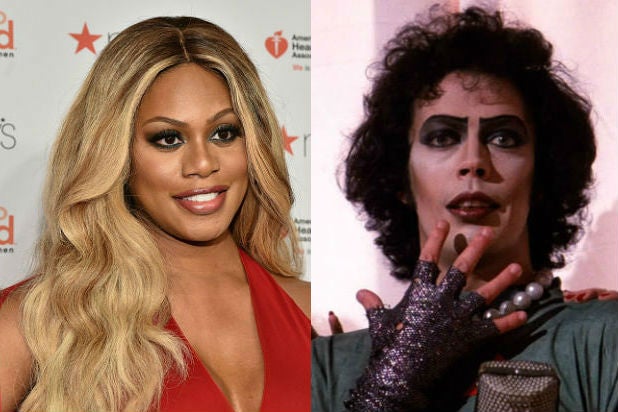 More than 40 years have passed, but Tim Curry and “Rocky Horror Picture Show” are doing the “Time Warp” again.

Fox is bringing back the 1975 cult musical movie classic as a made-for-TV movie, with Laverne Cox playing the role of Dr. Frank N. Furter that made Curry famous.

“I remember quite a lot of the original film, because it was my first movie,” Curry, now 70, told reporters Monday at the Television Critics Association summer press tour in Beverly Hills.  “I didn’t miss much. It was fun though, to do it again.”

Curry suffered a stroke in 2013 and appeared for the Fox panel in a wheelchair. In the remake, he plays the role of the narrator. “I actually offered myself as Dr. Scott, because I was already in a wheelchair,” Curry said. “They thought the narrator was a better fit.”

When a reporter asked how it felt to have the transvestite Dr. Furter be his most enduring character, the British actor deadpanned: “There’s not a lot I can do about it, really,” prompting laughter from the audience.

Lou Adler, one of the original producers of the 1975 movie, said that plans for a remake drew “backlash from fans, people who have been with us 40 years.” So it was important to have the blessing from Curry, he added.

“His validation gave them something to look forward to,” Adler said.

In Cox — the “Orange Is the New Black” star who became the first trans person to be nominated for an Emmy — producers believe they found someone who would avoid comparisons to Curry’s definitive star turn.

Director and choreographer Kenny Ortega said that Cox had wanted to play the part of Furter since she was a child.  “She’s a force,” Ortega said. At the audition, she was “walking in and making us realize there was no plan B … she had so much to give to it.”

When Cox finished singing her first number during production, he added, Curry was the first to offer, “Bravo!”