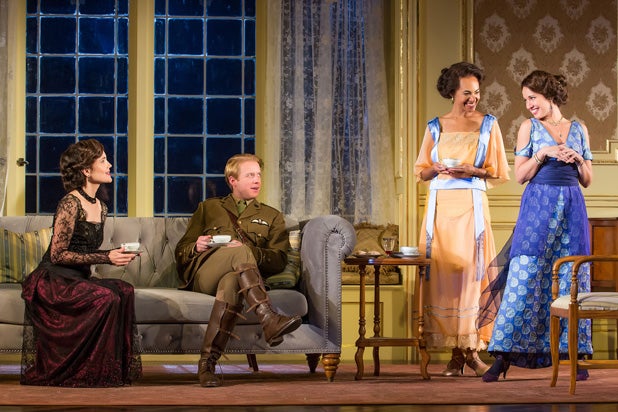 J. B. Priestley is one lucky dead playwright. Priestley is that famous, very prolific British writer whose many plays you’ve probably never seen unless you were in New York or London in the early 1990s and caught Stephen Daldry’s stunning Royal National Theatre revival of “An Inspector Calls.” Daldry took a not very intriguing drawing-room thriller and, to amazing effect, set it in a post-Blitz rainstorm.

A quarter of a century later, Rebecca Taichman stages what is only the second Priestley revival on Broadway since that 1994 “Inspector,” and like Daldry, she also works a minor miracle with second-rate material. Her take on “Time and the Conways,” which opened Tuesday at Roundabout’s American Airlines Theatre, isn’t as radical Daldry’s overhaul of “Inspector,” but she reshapes the drama enough to give it an emotional resonance that’s not on the page.

“Time and the Conways” is as much about time as it is the well-to-do Conway family of post-World War I Britain. It’s not such a stretch that Priestley goes from 1919 to 1937 in his first two acts, but that he returns to 1919 for his third act is a true novelty. Generally, such grand theatrical devices should not be revealed in a review, but (1) this is a revival, and (2) our knowing that Priestley will soon defy expectations helps to get us through that interminable first-act birthday party.

The six adult Conway children are playing charades for the entertainment of some offstage guests, who must be having a worse time of it than those sitting out front in the American Airlines Theatre.

Kay Conway (Charlotte Parry) is celebrating her 21st birthday, and we know she’s the smart one because she talks about writing novels. Her two younger sisters, Hazel (“Pitch Perfect” star Anna Camp) and Carol (Anna Baryshnikov), are prettier, and at least in the case of Hazel those good looks sum up her personality and her future, as we are to learn.

Two older siblings, Alan (Gabriel Ebert) and Madge (Brooke Bloom), are described by Priestley, respectively, as “a shy, quiet man…who can have a stammer” and a woman “not as pretty” as Hazel. Madge is also an ardent socialist, who speaks of nothing else; and as expertly played by Ebert, Alan has the good taste not to stammer.

Then there’s the star of the family, Robin Conway (Matthew James Thomas), fresh from the Great War and simply dashing in his uniform. No doubt about it, he’s the favorite of Mrs. Conway, the widow mother (Elizabeth McGovern).

Priestley doesn’t mess around as a playwright: Each character is established as a very specific type within moments of our being introduced to him or her, and nothing more is revealed about any of them to disturb that first impression. Mrs. Conway, for her part, is a silly shrew, and in the beginning the role seems an awkward fit for the usually level-headed McGovern. On “Downton Abbey,” her character was oft criticized for being such a typically “practical” American.

The guilty pleasure of watching “Time and the Conways” is to see just how low one successful family can sink in two hours. And that diversion is greatly enhanced by Neil Patel’s set design, which turns time travel into a visually stunning trip.

By 1937, the once-jolly Conways are a basket of deplorables. There’s nothing here but bad marriages, bitter spinsters, unemployment, alcoholism, deep debts, death. And most enticing of all, the Mommie Dearest of the lot gets her comeuppance. It’s here that any reservations about McGovern’s performance evaporate. She completely fulfills every complaint any of her children ever had about her, and yet remains completely oblivious to the rightfulness of their wrath.

But just as Priestly is unsubtle in establishing each of his characters in act one, he is just as blunt when it comes to dishing up their respective failures. Taichman, however, works magic with Priestley’s white-and-black approach. She makes us question what we’re witnessing on stage. In act two, are we seeing the ravaged Conway family as they really are in 1937? Or is this merely Kay Conway’s exaggerated fears of what she and her siblings will become?

Priestley gives his characters no subtext. They bluntly say what’s on their minds, especially Hazel’s arrogant working-class husband (Steven Boyer, even creepier than he was in “Hand to God”). Was Priestley incapable of writing a good subtle dig? Or are all these verbal assaults merely the product of Kay’s deep-seated paranoia?

Near the end of act two, Priestly throws in some dime-store physics about time and life, how you can’t look at either time or life as a collection of moments but as a continuum. Kay somehow finds solace in the thought. The problem is, the play’s continuum for the Conways would have them on welfare, or worse, by 1957.

Priestley’s cleverly switches back to the 1919 party for his third act. How can an audience not feel pity for these future losers as they prattle on about the money they’ll make, the great novels they’ll write, and how the world will be free of poverty, strikes, and war?

Priestley induces pity but provides little insight. It’s as if Tennessee Williams had taken Blanche and Mitch’s big love scene (“sometimes there’s God so quickly”), plucked it from the middle of his play and put it at the end of “A Streetcar Named Desire.” All this fooling around with time doesn’t make for great art. It does make for effective theater, at least in Taichman’s hands. She blurs Priestley’s writing just enough to give the play the quality of a dream, in this case, a very bad one that’s a treat to watch.

McGovern leads a marvelous ensemble under her direction. Baryshnikov gives a break-out performance in the supporting but very pivotal role of the enchanting Carol — she is truly enchanting.

Thomas has performed in musicals on Broadway (“Pippin,” “Spider-Man: Turn Off the Dark”), but in “Time and the Conways” he runs the dramatic gamut from golden boy to dissolute has-been, and back again. Priestley has written Robin Conway to be two clichés. Thomas makes both live with real fire and blood, and goes to the top of any theater producer’s leading-man dream list.