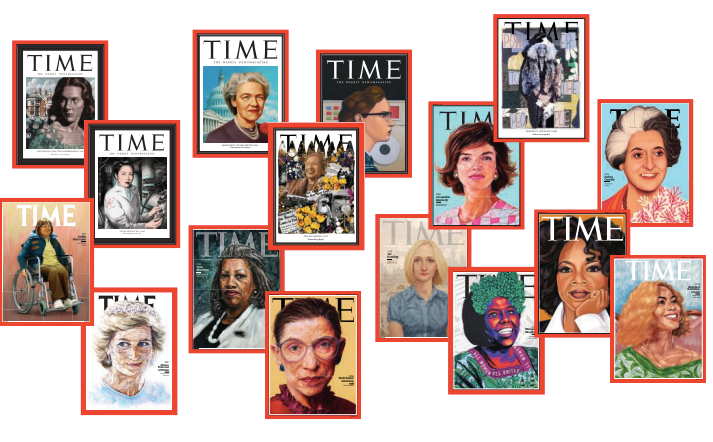 The Time “Person of the Year” used to be the “Man of the Year,” and while there have been women featured since the 1999 shift — the most recent recipient was climate activist Greta Thunberg — the magazine now wants to highlight 100 “Women of the Year” who shaped history, even when they weren’t being honored for it contemporaneously.

Thursday, Time rolled out its “100 Women of the Year,” a project that gives a unique cover to each honoree and, like “Person of the Year,” grants them a write-up from some of the most notable modern contributors. For instance, Natalie Portman penned the profile of 1962’s honoree, Jacqueline Kennedy and Olivia Wilde wrote about 1992’s Sinead O’Connor. A special print edition of the magazine features a pull-out poster with all 100 new covers, which also live online along with the essays.

“We looked back in history and wanted to acknowledge the women that history hasn’t always recognized or looked at,” editor Kelly Conniff told TheWrap prior to the announcement of the list. She attributed that lack of recognition to “the way the world worked” for so long, but noted her team’s goal has been “to kind of celebrate, acknowledge and recognize and find the women that deserve to have their moment on the cover of Time.”

“We decided to do an original cover for every single woman who had not been honored as a ‘Person of the Year’ previously,” added senior editor Emma Barker. “We started in 1920 going up through 2019 … We have 100 covers, all featuring these women, and they’re designed to fit the era of the year they were featured. All the ’20s are charcoal drawings, like they really were in the ’20s, like the old-time covers. They go through the design theme of each era.”

The project was conceived with filmmaker Alma Har’el while the honorees were selected by Time editors along with with Har’el  and a committee of influential women across different fields, including Katie Couric, Soledad O’Brien, Lena Waithe, MJ Rodriguez, Elaine Welteroth, Amanda Nguyen, Zazie Beet  and former editor in chief of Time Nancy Gibbs.

All the Women Featured on GQ's Men of the Year Covers, From Jennifer Lopez to Jennifer Aniston (Photos)

Jennifer Lopez — the actress, producer, musician, and all-around pop culture icon — was honored with a cover for GQ's Men of the Year issue in 2019. The "Hustlers" star spoke with Jessica Pressler, the New York magazine writer who wrote the original story that "Hustlers" is based on, about her prolific career.

"There is no reason to ever be ashamed of where you're at. Not when you're doing your best. Not when you're in your best moment," Lopez told Pressler. "There's always gonna be people to tell you no. Or 'You can't.' Or 'You shouldn't.' It's gonna happen. No matter what anybody says, you just have to still be like, 'I'm still doing this. I'm still gonna succeed. I'm still gonna do my best.' Defy the odds. Why not?"