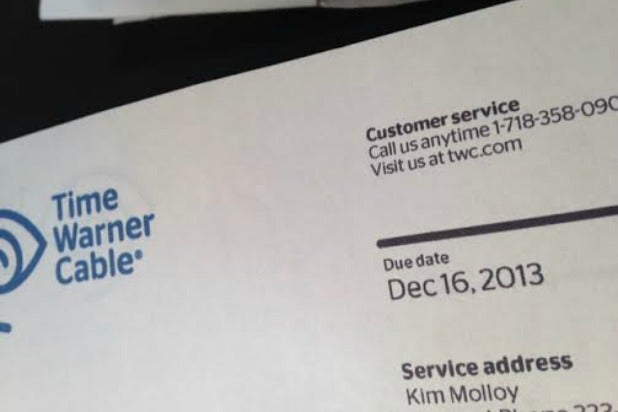 I’m looking at a bill from Time Warner Cable to someone named Kim Molloy, who apparently lives at my address.

America’s second-biggest cable company assigning me a girl’s name is just the latest joke in my farcical quest for home wi-fi. Am I really complaining about a company’s failure to send words and images through air? I guess so. But then again, I’m paying for that miracle – or at least Kim Molloy is. Together, we’ve lost hours dealing with this.

It’s been my experience that TWC is one of those companies with masterful media relations, but not-so-great customer service. One cleans up after the other. Do I blame the employees who answer calls and install modems? Of course not. The company wastes lots of their time, too, with scripts that make them sound like robots.

Year-over-year, the company is down further in video customers, but it’s up in online subscribers. That may be because of a wider trend of people cutting cable for online. Revenue in home high-speed data was up 14.2 percent from the year before, to a little over $1.4 billion – for reasons we’ll get into soon.

I know this business stuff because besides being Kim Molloy, frustrated customer, I also cover the company as a reporter for TheWrap. You’ll be shocked, shocked to learn that when I called the company in my reporter capacity, to see if Kim’s experience was typical, lots of nice people suddenly took interest. Until I played the reporter card, Kim got only the promise of $25 credits for missed appointments.

How does this relate to you? Well, if you’re a writer at one of America’s most beloved entertainment sites, you can do what I did, and probably get great service.

But if you’re a lawyer or movie star or veterinarian who doesn’t have hours to wait around? Good luck to you, Dr. Nobody.

But back to my dumb life. I had TWC video and internet before and didn’t like it: too many service outages. So I decided to sign up for Earthlink. The name sounded friendly. Earthy.

Silly me. It turns out TWC has a near monopoly on large sections of New York – and a deal with Earthlink that ended up bouncing me back to my old friends at TWC. Okay, I said. Sign me up.

On the first day of my scheduled installation, Nov. 24, no one showed. Okay. A friendly technician did appear on the 26th. He installed a cable modem and router, but not the wi-fi one I needed.

I’m not a tech snob. I have Yahoo mail. But my three-year-old computer doesn’t even have a jack for the cord I would need to connect to cable internet. If I can get free wi-fi at McDonald’s and Starbucks and that park where a kid just got shot for his jacket, shouldn’t I be able to pay for wi-fi at home?

I was confused. “Do you mean…” I tried to put it delicately. “You have the wrong modem?”

He told me I had to call Time Warner to get the right one.

“But… you… are Time Warner,” I didn’t say, because I am a coward. I dialed and the TWC rep on the other end said maybe I could rent the right modem… for a price.

(Completely coincidentally: The company’s latest earnings report says its increased revenue in high-speed data revenue is largely due “to an increase in equipment rental charges.” Huh!)

Because TWC had already brought the wrong modem once, I asked a customer service person exactly what kind I needed. I found it on eBay. I asked her if I could order it online. She said yes. I ordered.

Another missed appointment later, another tech arrived. (For the sake of timeliness, I’m skipping the whole week when TWC and Earthlink claimed my address didn’t exist.) He spent an hour on the phone with another tech person who said I couldn’t use my own modem. So the tech left.

Was my situation at all unusual? Nope, according to one of the many TWC employees I talked to, who will remain unidentified for obvious reasons.

I was going to give up. But then I got a bill for the month of internet I haven’t been getting.

I sent an email to the good people at TWC PR, asking them for their side. As no one ever could have predicted, someone called the next day, saying my new modem would work just great, and that someone would be by soon to set it up. They said the problems may have had something to do with the Earthlink handoff. Later someone else called, to get the ball rolling. They even agreed to give me back my name.

Kim and I will be waiting.

(Update: The day after this story was published, a TWC technician stopped by and set up wi-fi. After a day, it stopped working. I canceled service. The next month, I got a call from a collection agency wondering why I hadn’t paid my bill.)