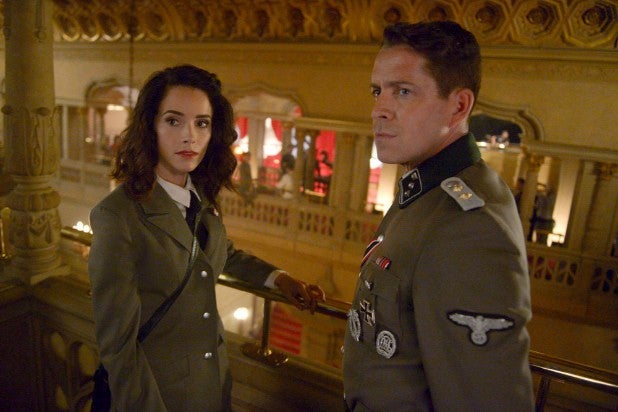 (Note: This post contains spoilers for the season finale of “Timeless.”)

In quite the shocking twist, NBC canceled “Timeless” only to change its mind and renew it a couple days later.

Which is great, because the first season of the delightful time travel drama left a whole bunch of dangling plot threads, and so there will be plenty of time travel conundrums for the Time Team to deal with once they resume hopping through history. Flynn’s in custody, Rittenhouse has the Mothership, and secret villains are revealed.

There are also some interesting sci-fi puzzles to deal with in Season 2. “Timeless” has suggested some very interesting things about how time travelers might have already changed history. Are there multiple Lucys? Will Wyatt ever save his wife? What’s the deal with Rittenhouse, actually?

Here are all the questions burning up our brains for if and when “Timeless” comes back to continue the story.

2. Is Emma a mole or a hostage?
Emma, the missing time machine pilot Flynn (Goran Visnjic) found with Jesse James, turned out to be a Rittenhouse mole. She captured the Mothership for the group in the finale — or did she? Emma (Annie Wersching) was supposedly hiding out from Rittenhouse in the past, but that seems like some extremely deep cover for a mole no one might ever find. Could she be working for Rittenhouse under threat, like Rufus was? We’ll need to find out more about her situation in next season.

3. Seriously, what happened to Wyatt’s wife?
Wyatt (Matt Lanter) tried to save his wife by erasing from history the serial killer who Flynn said killed her. He saved two victims, but his wife stayed dead. So what exactly happened to her, and who killed her? It seems more and more likely time travel intervention played a pivotal role there. It’d make sense, as it probably helped set up Wyatt’s involvement in the time travel missions.

4. Is the is the last we’ll see of Noah?
When Lucy (Abigail Spencer) got back from the Hindenburg mission, her sister had vanished from changes to the timeline. Lucy also gained a fiance named Noah (Daniel DiTomasso). She basically ignored him until the finale, when his doctor skills became useful, then broke up with him. But given how everyone is a Rittenhouse agent in Lucy’s life, could Noah pop up again?

5. Is Lucy’s mom super evil?
Sure seems that way. Lucy’s mom Carol (Susanna Thompson) revealed herself as a Rittenhouse member in the finale. She was also aware of time travel and Rittenhouse’s master history alteration plan. Season 2 will definitely tell us more about her involvement, but going back to “What’s Rittenhouse’s deal” — what’s Lucy’s mom’s deal? What does she gain through her Rittenhouse involvement, especially in the timeline in which she was sick?

6. What’s the deal with Old Lucy and the diary?
Flynn has been referencing Lucy’s diary all season, which she gives him in the future. In the finale, he tells Lucy she ages well. It’s pretty obvious, then, that Lucy travels back from a future point to give the diary to Flynn so he could beat Rittenhouse. But at the end of Season 2, Rittenhouse has seemingly won — so did Lucy create the future she was trying to prevent? Seems likely.

7. Is Jiya caught between timelines?
In the finale, Jiya (Claudia Doumit) has a seizure after being the one-too-many in the Lifeboat time machine. In the background, we see the Golden Gate Bridge flicker, flipping between now and, according to show creator Eric Kripke, the year it was built. Jiya’s become unstuck in time, it seems. Is she going to become some kind of time travel prophet? Or just be doomed to a life of constantly hopping timelines like Eric Bana in “The Time Traveler’s Wife?”

8. How many timelines are there?
As “Timeless” unfolds, the characters jump through time and change history, altering events the audience knows in subtle ways. But Flynn has Lucy’s diary that tells him where to go and what to do. That suggests there’s at least one other, third timeline, that gave Old Lucy all her information. It also suggests Flynn and the Time Team might not be the only active time travelers out there. Finally, there’s the question of whether all these time travel alterations were predestined. Future Lucy seems as though she might have created the events she set out to stop — how much Rittenhouse control is in play in all these time travel machinations?

9. Is our history altered by time travelers?
If there’s at least one other timeline, it means the timeline Lucy remembers from the start of the show isn’t the original version of history. That could mean that Rittenhouse, or someone else, already meddled with America so much that what we know about historical events is the altered version. It’s probably impossible, but if the Time Team could get back to it, it’d be interesting to see what “Timeless” might consider the “original” version of America.