Women’s rights organization Time’s Up will embark on a “major reset” of the organization, with nearly the entire staff being laid off and “rebuilt,” the group’s board of directors announced Friday.

With the exception of a small transition team remaining, the company’s remaining 25 staff members will be let go with current programmatic operations ending January 1, 2022. Staff will receive severance through March 1. And the interim president and CEO Monifa Bandele will step down while a small transition team and board will oversee the process.

Time’s Up, which was created three years ago to protect and support survivors of sexual assault amid the growing #MeToo era, entered into a tailspin after it was revealed that its leadership had been working with ex-New York Governor Andrew Cuomo to mitigate accusations of sexual misconduct against him. The revelations led to the resignations of board chairwoman Roberta Kaplan and CEO Tina Tchen, and many of the group’s board members, including Eva Longoria, Shonda Rhimes and Jurnee Smollett, all left in a mass exodus.

Also Read:
Crisis at Time’s Up: How Can I Miss Something That Never Existed? Reflections of a Weinstein Survivor (Opinion)

Time’s Up’s remaining board members include Colleen DeCourcy, Raffi Freedman-Gurspan, Ashley Judd and Gabrielle Sulzberger. And according to the board, the structure, strategy, and staff of the group will be rebuilt from the ground up. The decision comes after a management review by an independent consultant.

No timeline has been announced for the organization’s next leadership or strategic goals.

“This is a needed reset, not a retreat,” board chair Gabrielle Sulzberger said in a statement. “Time’s Up stands for accountability and systematic change in the workplace. It is incumbent on us to learn from these findings, and focus on building an organization that powerfully serves women of all kinds and ends the impunity of sexual harassment and assault in the workplace.”

“We persevere. We will not lose the ground gained for women’s equality and safety over these last several years,” Bandele said. “Our movement and the stakes for our entire society and future generations are so much bigger than one organization or title. We will continue to make significant contributions, both through work led by Time’s Up and beyond.” 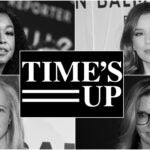 Judd told The Washington Post as part of the restructuring that, “we are going down to the studs to completely rebuild.”

As TheWrap previously reported, many have questioned if the organization that was created in 2018 by a focused group of powerful women in entertainment, media and politics would be able to create change, or if it was destined to be co-opted by the very systems their stated aim was to disrupt.

Others have also complained about the group’s increased advocacy in non-MeToo issues, including public statements about racial equity at the Golden Globes and Scarlett Johansson’s contract dispute with Disney over “Black Widow.”