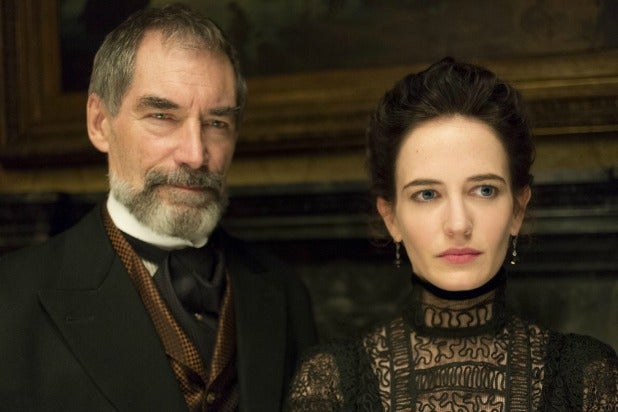 We had a lot of questions for Timothy Dalton about Sunday’s crucial “Penny Dreadful,” a captivating episode that explains the tortured relationship between his character and Eva Green‘s, while making us reconsider everything we’ve seen before.

But first he had a question for us.

“You and I have not talked before, right? Have you been reading anything that I’ve ever said about ‘Penny Dreadful’?” he asked, in a voice between a lilt and James Bond’s gentlemanly growl.

We confessed that we had not.

“Because I’ve just looked it up and I’ve got it on my computer screen now, your ‘Penny Dreadful’ review: ‘A Lovely, Lurid Study of Life and Death.’ I don’t know whether to be pissed off with you or really pleased,” he continued. “Ever since last September, my sort of catch line about the show is that it’s about the spaces between life and death. And that’s exactly what you’ve centered your article on. … You took the words right out of my mouth.”

All of the Victorian drama’s characters – from Dalton’s mournful Sir Malcolm to Green’s damaged Vanessa – are looking for ways to beat death. Sometimes after death has already won.

“Even the cross hanging on the wall is about eternal life,” Dalton says. “That’s the superstitious part of it, and of course Frankenstein’s the scientific part. Both of which in the real time were in massive opposition to each other. In our time they can walk hand in hand.”

On Sunday, we learn what first united Malcolm and Vanessa in their quest to save Malcolm’s daughter, Mina, from an apparent vampiric master. It may be the most frightening episode so far. It’s certainly the saddest.

At the time of the interview, Dalton hadn’t seen the completed episode, the show’s fifth.

“You’ve seen five?” he asked. “You are such a shit. You know, one of the most difficult things, I find, and I don’t think I’ve ever done it ever before, is to be asked to talk about a show that I’ve never seen.”

Showtime didn’t give him a screener?

“They won’t send me any!” said Dalton. “You write what you want to write and just put my name on it. We can cut this off now.”

Okay, but maybe a couple of questions first?

TheWrap: You, creator John Logan and Eva Green have all been part of the Bond franchise. How much time do you spend talking about 007?

Dalton: I would say virtually none. We’ve got friends in common, but no. I know it’s kind of disappointing if you’re a fan, but it’s a job I did… 25 years ago. You don’t concentrate on the mythology. You just do your job.

What do you really love about “Penny”?

I can give you the absolute truth, but it is kind of a cliché. I love writing. I love words. I love good drama. When you start reading a story that grips you and involves you and makes you ask lots of questions, that makes you turn the page in excitement about what is gonna to happen next, you know you’re reading something good.

I’ve noticed that Wikipedia can’t decide how old you are. It says that you’re either 68 or 70. You look much younger.

Well, I am much younger. There is very little on Wikipedia or IMDB about myself that is true. And I don’t mind that. Because that tissue of lies keeps the truth safe. The irony is, of course, that if you ever try to fix anything, you might succeed for a day or two days, and then all of the other people write in saying ‘That’s not true! We know what the truth is!’ And then it gets turned back to the lie.

[Note: At this point Dalton asked us questions about Sunday’s episode.]

Dalton: So tell me about five.

Dalton: Does that scene work?

Absolutely. The entire episode works really well. And the coolest thing about it, honestly, is that we now know all these things that you don’t know. But it adds depth to everything we’ve seen before.

[Note: Here we switched back to interviewing.]

TheWrap: As a critic, I always think, why would I spoil something? There’s no way I would reveal it better than you would.

Dalton: There’s a current sort of almost madness to discover how stunts are done and special effects are done. It shows everybody everything and it kind of spoils the magic. I don’t know if you remember [the first Bond film] “Dr. No”? I saw “Dr. No” when I was a kid. And I remember – holy shit! Hanging onto the edge of my seat when that fucking spider walked up his chest. The tarantula. Now had I been told that there was a sheet of glass between his body and the spider, it would have kind of spoiled the moment, wouldn’t it?

Is that something they tell you when you become James Bond? ‘Here’s how we did the tarantula trick?’