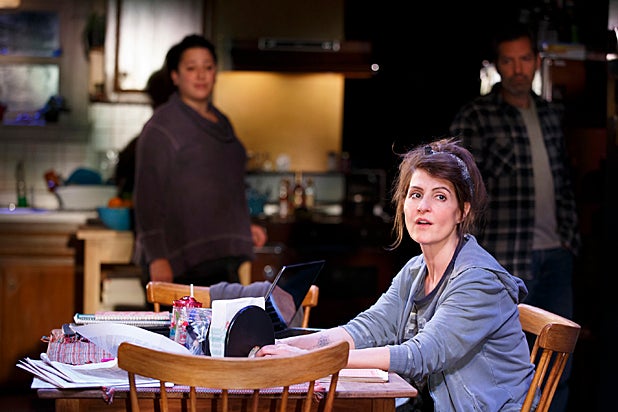 Back in 1980, the late, great film critic Vincent Canby wrote in The New York Times that Michael Cimino must have made a bargain with the devil when he directed the Oscar-winning “The Deer Hunter,” because his follow-up effort, “Heaven’s Gate,” was so stupendously awful.

You might consider Canby’s musings on a Faustian bargain when seeing “Tiny Beautiful Things,” which opened Wednesday at the Public Theater in New York City, and is directed and co-conceived by Thomas Kail, whose most recent Broadway venture is “Hamilton.”

2016 is coming to an end, so it’s safe to say that “Tiny Beautiful Things,” adapted, co-conceived, and performed by Nia Vardalos of “My Big Fat Greek Wedding” fame, is the goopiest play of the year. In comparison, “Love Letters” is Chekhov.

“Adapted” is a good word for Vardalos’s work here. The script about a Dear Abby-type columnist is almost verbatim from Cheryl Strayed’s best-selling book “Tiny Beautiful Things: Advice on Love and Life from Dear Sugar,” based on her advice column.

The third co-conceiver of this 75-minute show is the Wall Street Journal’s Marshall Heyman. It’s amazing that it took three people to come up with such a concept: The columnist who writes under the non de plume Sugar (Vardalos) speaks directly to her troubled letter writers, who materialize in her shlubby apartment (shag carpeting, really?) in the form of three actors: Phillip James Brannon, Alfredo Narciso and Natalie Woolams-Torres.

A few minutes into “Things,” when it becomes obvious that no co-conceiver of this group project had  Nathaniel West’s “Miss Lonelyhearts” in mind, you might take refuge in the fantasy of a classic “Saturday Night Live” skit.

What if Sugar were a whole lot more screwed up than anyone in her vast readership? “Things” touches on this role reversal, but keeps Sugar’s own troubled history very much in the past. Yes, like so many of us, she’s divorced, now remarried and bored, overcome addiction to heroin and meth, tried slitting her wrists, jerked off her grandfather when she was a kid.

I kept waiting for these letter writers to feel so much better about themselves after listening to Sugar grovel in her sordid past, and be done with her. But no. Sugar has learned from life’s trials and mistakes, and passes on those lessons free of charge (except for theatergoers) with her tight face scrunched into the deepest empathy and bathed with tears, lotsa tears. Each piece of advice concludes with her saying, “Signed,” (long pause, soulful gaze out over the audience) “Sugar.”

Near the end of “Things,” a man whose son has been killed by a drunk driver writes a letter to Sugar, which means he has to read us the letter. It contains 24 points of discussion. Whenever any performer starts giving out numbers, it’s automatic to think: How many more numbers are there?

“Things” takes that claustrophobia to new levels of panic. After the grieving father has finally, finally finished, Sugar feels compelled to answer all two dozen points.